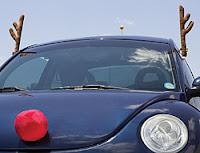 The other day I saw an SUV with reindeer antlers.
Later, I saw a couple of other cars with antlers.
The antlers stick out of the top of your vehicle in the front, on either side.
The spirit of the season, I suppose. But why would you want to put antlers on your car? I don't get it. I think it looks stupid.
Nor do I understand wreaths attached to the fronts of cars and trucks. I don’t know whether this began as some kind of a redneck joke or what. But now I see cars, trucks and even buses with these artificial wreaths on them. There’s something downright goofy about it. What makes people think that they need to decorate their vehicles for Christmas? Isn’t there enough to do?
Posted by Dan Cirucci at 5:17 PM