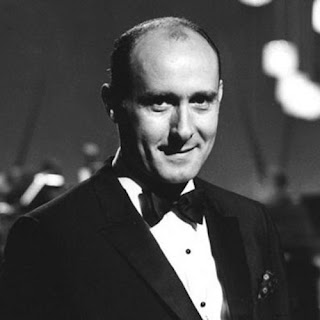 Henry Mancini
He was actually born in the Little Italy neighborhood of Cleveland, Ohio. And his real name was  Enrico Nicola Mancini. Both his parents were Italian immigrants. Originally from Scanno, Abruzzo, his father Quintiliano "Quinto" Mancini was a laborer at the Jones and Laughlin Steel Company and amateur musician who first came to the U.S. as a teenager around 1910. His mother Anna (née Pece) came to the U.S. from Forli del Sannio as an infant.
This accomplished composer, conductor, arranger, pianist and flautist broke all the records. Often cited as one of the greatest composers in the history of film, he won four Academy Awards, a Golden Globe, and twenty Grammy Awards, plus a posthumous Grammy Lifetime Achievement Award in 1995.
At age eight, Mancini began learning the piccolo. Mancini said that hearing Rudolph Kopp's score in the 1935 Cecil B. DeMille film The Crusades inspired him to pursue film music composition despite his father's wishes for him to become a teacher.
After turning 18, Mancini enlisted in the United States Army Air Forces in 1943. While in basic training in Atlantic City, New Jersey, he met musicians being recruited by Glenn Miller. Owing to a recommendation by Miller, Mancini was first assigned to the 28th Air Force Band before being reassigned overseas to the 1306th Engineers Brigade in France. In 1945, he helped liberate the Mauthausen-Gusen concentration camp in Austria.
His list of hits ranges from Moon River to the Pink Panther theme and his songs have been recorded by every major recording artist. Mancini recorded over 90 albums, in styles ranging from big band to light classical to pop. Eight of these albums were certified gold by the Recording Industry Association of America. Mancini himself had a 20-year contract with RCA Victor, resulting in 60 commercial record albums that made him a household name among artists of easy-listening music.
But Mancini was also a concert performer, conducting over fifty engagements per year, resulting in over 600 symphony performances during his lifetime. He conducted nearly all of the leading symphony orchestras of the world, including the London Symphony Orchestra, the Israel Philharmonic, the Boston Pops, the Los Angeles Philharmonic and the Royal Philharmonic Orchestra. One of his favorites was the Minnesota Orchestra, where he debuted the Thorn Birds Suite in June 1983. He appeared in 1966, 1980 and 1984 in command performances for the British Royal Family.
Part of a month long series spotlighting a different accomplished Italian American every day during Italian American Heritage Month.
Posted by Dan Cirucci at 8:12 AM