Why We Revere Lincoln 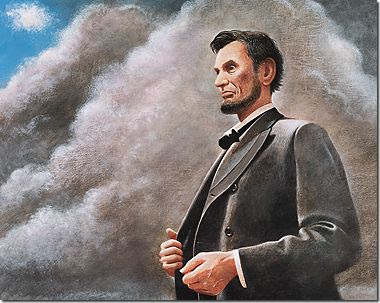 From Professor Walter Berns in the Wall Street Journal:
Our extraordinary interest in him, and esteem for him, has to do with what he said and how he said it. And much of this had to do with the Union -- what it was and why it was worth the saving. . . .
It is not by chance that his best and most celebrated speech was delivered on a battlefield, on the occasion of dedicating a cemetery filled with the graves of patriots. I speak, of course, of the Gettysburg Address.
It is brief, a mere 272 words, and could not have taken much more than five minutes to deliver. In its central passage, Lincoln says, "The world will little note, nor long remember what we say here, but it can never forget what they did here." Well, what little do we remember?
We remember he said that this nation was founded in 1776 with the Declaration of Independence and its principles. We remember this because of the unusual way he said it. Not 87 years ago, but "four score and seven." His Bible-reading audience assembled there (and afterwards) would surely have remembered what he said because in what he said they would have heard echoes of the 90th Psalm, where the psalmist says, "three score and ten," our years on this earth. They might also have thought -- as they probably were expected to think -- that our founding, if not sacred, was surely not profane.
This, too, we remember: Lincoln goes on to say that the brave men, living and dead, who struggled on this ground, this battlefield, had "consecrated" it better than he or anyone else could. Consecrated? Had made it sacred, a battlefield? As if they -- presumably the Union soldiers -- were fighting for the Lord? No, but their cause was great and noble.
We also remember Lincoln saying that their work was "unfinished," and that we, the living, should highly resolve that these dead shall not have died in vain and that this nation, "under God, shall have a new birth of freedom," and that government of, by and for the people shall not perish from the earth.
What little do we remember? In a word, and despite what he said, we remember everything he said. And we remember it because he took great pains to say it beautifully. . . .
We say that a man can be known by the company he keeps. So I say that a nation, a people, can be known and be judged by its heroes, by whom it honors above all others. We pay ourselves the greatest compliment when we say that Abraham Lincoln is that man for us.
Posted by Dan Cirucci at 9:40 AM

It's funny, when I think back to grade school, I can't remember being taught that much about the Civil War. And even into high school, that part of history seemed to be almost glossed over; of course; we learned about slavery, the great battles, and the implications that the war had on the shaping of society. But what we learned about Lincoln was his history before he assumed command of a nation in turmoil. We were taught little of his presidency. So looking back, Lincoln was cemented as the man in charge of the defining moment in our brief history, but we never went further.
I would have loved to learn more; and I think kids today, especially during their early years, need to be focused on the great examples that serve to show why this country is great.
The legendary stature that the marble giant occupies today is deserved; I just think that teaching about the man, and his struggles, is just as important.