Inspiring Story - A 'Celebrity' Who Overcame The Odds 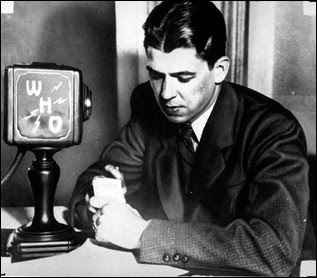 Sometimes we've talked about "the dangers of electing a celebrity President."
So, the question has arisen: "Wasn't Reagan a celebrity?"
As we're writing this we're looking at a shelf full of books about Reagan (at least a dozen of them) all of which we've have read.
Ronald Reagan certainly defied the old adage that "there are no second acts in American lives."
Ronald Reagan's life had at least three distinct acts. In fact, it's almost as if he had three different lives:
1) Ronald Reagan the radio broadcaster honed his talents as a mellow-voiced, reassuring presence who was heard throughout the broad center of the nation. He mastered the art of the soundbite before anybody even knew what it was and since he wrote most of his own radio copy he also became an accomplished writer and skilled editor. If you know anything about radio you know that you must be able to say a whole lot with very few words to adhere to the medium's time constraints. Ronald Reagan knew it and did it.
2) Ronald Reagan the Hollywood star was never the biggest star in Tinseltown but he and his films were a staple at Warner Brothers and he learned his lessons well from the studio. He was a dutiful contract player who became a favorite of the gossip columnists -- particular the legendary Hedda Hopper. And yes, Reagan did become a celebrity of sorts but he was certainly never a superstar. In fact, as a Hollywood star he was never really the object of adulation. He was far and away eclipsed by the likes of Clark Gable (earlier) and Rock Hudson (later). Reagan was rarely a leading man. He starred mostly in "B" movies and he played the best friend or jilted lover or simply the "other guy." It's safe to say that not many movie fans swooned or fainted over Ronald Reagan.
3) Ronald Reagan the politician did have his roots in Reagan the Hollywood union leader but the real career switch came when Reagan decided to run for Governor of California. By that time Reagan's image as a "star" had clearly faded and, indeed, he was joked about as "a forgotten, old 'B' movie actor." When he began his political career Ronald Reagan was no celebrity. To the contrary, he was the butt of jokes.
To his credit, Reagan seemed to make clean, clear breaks between the three important acts of his life but he always took everything he learned with him.
Was Reagan, the leader charismatic? Damned right he was.
But there was more than image to Reagan. Though he enjoyed being underestimated, the man was never an empty suit.
And any Hollywood star who's thinking about entering politics today (and a few immediately come to mind) would do well to study the life and careers of Reagan.
Ronald Reagan understood that fame was fleeting and that Celebrityland was shallow. He worked his whole life to be more than just a "star" -- even a forgotten one -- and more than a household name. He defied the odds. And in the end, he had both depth and heft.
What he accomplished was nothing short of remarkable.
Ronald Reagan was the real deal.
Posted by Dan Cirucci at 11:25 AM