From Smallest Victims To The Greatest Adventure

The smallest victims of the Crisis Next Door

The opioids crisis touches Americans from all walks of life, responsible for more deaths than either car accidents or gun violence last year. Addiction tears up families everywhere from inner cities along the coasts to rural communities in the heartland.

Some of its victims are the smallest, most vulnerable among us. From 2000 to 2012, America saw a five-fold increase in the share of babies born with Neonatal Abstinence Syndrome (NAS)—equivalent to one baby suffering from opiate withdrawal born every 25 minutes, according to the National Institute on Drug Abuse.

An update on Hurricane Lane

FEMA is working alongside multiple partners to actively support Hawaii’s efforts as they respond to the potentially devastating impacts of Hurricane Lane.

Hurricane Lane is a Category 3 storm and continues to move westward across the Central Pacific with maximum sustained winds of 120 mph, according to the National Oceanic and Atmospheric Administration. Hurricane watches and warnings have been issued for parts of Hawaii.

President Trump urges all Hawaiians to follow the direction of state and local officials, including evacuation orders when given. Local residents are encouraged to visit Ready.gov/hawaii or the Hawaii Emergency Management Agency for more information.
Read the President’s Emergency Declaration for Hawaii.

‘I was an astronaut. We need a Space Force.’

“For more than 50 years, this storied center has been at the forefront of America’s journey to the stars,” Vice President Mike Pence told NASA employees yesterday in a visit to Johnson Space Center in Houston, Texas. “Here, from the Mission Control Center, you have guided every American-crewed space expedition since 1965.”

“The United States Space Force, we believe, is an idea whose time has come,” the Vice President said. Terry Virts, a retired U.S. Air Force Colonel who served as Commander of the International Space Station, agrees. “It’s hard to overstate the importance of space in our military operations and civilian life,” Virts writes in The Washington Post this week.

“China and Russia have made it clear they are not willing to accept the status quo.”
“I was an astronaut. We need a Space Force.”
Watch: “America will lead mankind to the stars once again,” the VP says.

Photo of the Day 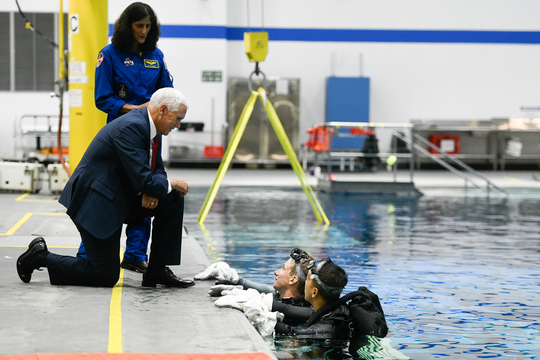