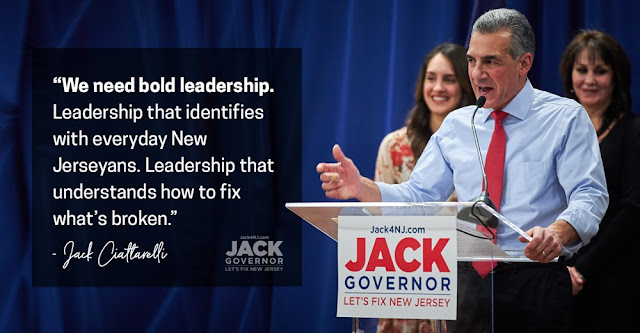 MBA/CPA, successful small businessman and conservative outsider Jack Ciattarelli today outlined his “Contract with New Jersey Republicans,” a specific, five-point plan focused on revitalizing the NJGOP with dynamic leadership, a clear message and a concerted effort to bring party leaders and conservative grassroots activists together to drain the swamp in Trenton and win elections across the state.

Ciattarelli, who has won seven general elections – including six in races where Democrats outnumbered Republicans – pledged to reorganize, revitalize, and grow the New Jersey Republican Party in all 21 counties and 566 municipalities.
“I’ve won elections in a town, county and legislative district that look like New Jersey.  I can win this Governor’s race. When I do, my plan is to not just fix New Jersey, but to fix the New Jersey Republican Party, too,” said Ciattarelli.  “From young staff to volunteers to activists, including people of all race and color, we have people who work very hard, but the leadership and direction from the top has been lacking.  I am going to change that.”
Ciattarelli’s “Contract with New Jersey Republicans” promises to:
1. ESTABLISH A NEW JERSEY REPUBLICAN BRAND that offers concrete solutions to lower taxes, cut spending, reduce debt, create jobs, provide educational choice, make healthcare more affordable, and protect individual freedoms, while expanding our party to reflect the diversity of our state. Under my leadership, we will proudly be the Party of Lincoln in every way and compete for every vote.
2. APPOINT A DYNAMIC STATE CHAIRPERSON who, along with an experienced political staff, is solely focused on working hand-in-hand with local, county and legislative party leaders and grassroots activists to strengthen our party, build an effective volunteer corps, recruit high-quality candidates and run professional, winning campaigns.
3. IMPLEMENT A ROBUST AND EFFECTIVE NJGOP FUNDRAISING STRATEGY and restructure the New Jersey Republican State Committee to ensure that monies raised are earmarked for electing Republicans at all levels. That includes committing to helping each county organization raise money annually with the goal of bolstering Republican organizations, building party infrastructure and winning general elections.
4. BRING PARTY AND ELECTED LEADERSHIP TOGETHER WITH CONSERVATIVE GRASSROOTS ACTIVISTS and organizations to find common ground and develop messaging that enables us to win governing majorities at the local, county and state levels. We do not need to agree on every issue or tactic, but all voices deserve to be respected and at the table.
5. WORK IN CLOSE COLLABORATION with the most knowledgeable parties to effectively draw legislative and congressional maps that provide an opportunity for Republicans to compete for and win majorities in both houses of the State Legislature and achieve more partisan balance in our congressional delegation.
“Doug Steinhardt’s tenure as NJGOP Chairman was an embarrassing failure,” said Ciattarelli Campaign Manager Eric Arpert.  “New Jersey Republicans lost 21 of a possible 24 congressional races; lost previously red counties and municipalities all over the state; watched Democratic voter registration outpace Republican registration better than 2-to-1; and allowed  President Trump to lose 53 New Jersey towns in 2020 that he had won in 2016 , prior to Steinhardt being the Chair.
This should not come as a surprise given that Steinhardt and his Democrat partners were busy contributing over $1 million to Democrat candidates and organizations around the state – with contributions to Democrats outpacing contributions to Republicans nearly 4-to-1. In return, Steinhardt and his partners raked in $50 million in pay-to-play contracts.  Is it any surprise Republicans suffered huge losses?”
Posted by Dan Cirucci at 3:27 PM