From our friends at the wonderful Save Jersey Blog
By Matt Rooney | The Save Jersey Blog
The logic behind a guy seeking the GOP nomination for president appointing a former Torricelli/McGreevey bureaucrat to a critical cabinet post still eludes me, Save Jerseyans.

But here we are. We’re saddled with Jamie Fox now. And this is how he’s spending his time: advocating for a punishing increase in the one tax in New Jersey that isn’t suckily high (the gas tax) and, this past Sunday, penning a guest op-ed in the Star-Ledger claiming that New Jersey’s per-mile road maintenance isn’t nearly as expensive as claimed by gas tax hike opponents.

For starters, he complains that the study treats multiple lane highways like single-lane ones. Moreover, “New Jersey gives out nearly $330 million a year in local transportation aid to counties and municipalities. This helps local government take care of local roads without having to raise property taxes,” Commissioner Fox explains. “The Reason Foundation counts the spending we give to local government but doesn’t count all the miles of local roads that are repaired or built. Therefore, states with greater jurisdiction over local infrastructure fare better in the analysis as those centerline miles are credited to the state.”

You can find a copy of the eye-opening study here.

My #1 problem with Fox’s logic? Divide the number by the actual average number of lanes and New Jersey’s road costs are STILL the highest in the nation. By a mile. Many times over. 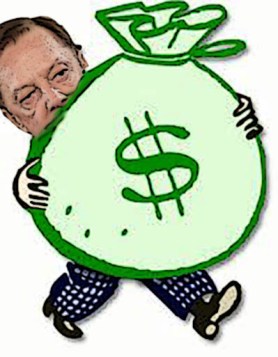 The Commish is apparently fond of analogies, using six-packs of soda to make his point. Here’s one of my own: in his op-ed, Fox is kindof like an oncologist telling his patient to disregard cancer doctor #1’s opinion because that doctor relied upon a different baseline to measure the tumor. Granted, neither doctor disagrees that it’s stage 4, serious, imminent and deadly. The only substantivedisagreement? Courses of treatment.
Here, unbelievably, Fox wants to hand the proverbial lung cancer patient (Trenton) a fresh pack of cigarettes (more revenue). Without telling us the “real” cost, by the way, you should’ve noticed! Save Jersey & friends? We’re going cold turkey and addressing causations, not symptoms. Here are just 10 things we should try first before raising the gas tax, solutions which we outlined with our friends at AFP-NJ last week. Even Scott Garrett, at the federal level, is trying to innovate.

An unsolicited second opinion for Commissioner Fox and his allies: instead of toiling to provide free content for a dying newspaper, put your lavish $141,000 salary to work for the taxpayers, fighting to end the prevailing wage and cutting EVERY shred of waste, redundancy, and inefficiency out of the budget before begging the nation’s most put-upon taxpayers for another red cent. Assemblymen Carroll and O’Scanlon introduced a bill in December that would address the prevailing wage problem.

Anything short of confronting it head on is public sector malpractice of the highest degree.

But don’t hold your breath waiting for that, Save Jerseyans. Much like legislative gas tax hiker-in-chief John Wisniewski, Fox has a long history in Trenton being a part of the problem. These guys, either through commission or omission, OVERSAW the decline of our state transportation system. And they’re still in denial; control-F search for “prevailing wage” in Commissioner Fox’s op-ed and you’ll come up empty.

No new solutions. No fresh thinking. Not even a feigned attempt at reform. I could almost stand something like a gas tax hike if ANY real institutional change driving the costs of road maintenance was on table. It’s not.

This is just another nakedly lazy and patently offensive raid on you and me, the taxpayers (who are still not en route to North Carolina), one more time (for the millionth time), seeking another quick fix while the Trenton elite cash in.

I, for one, ain’t buying into it anymore. Trenton is spending $32.5 billion of our money this fiscal year but they can’t fund roads OR pensions? Where is it going? You’re welcome to join me in demanding an answer, New Jersey, either in opposing these clowns or developing some sort of gated former N.J. resident refugee community in Montana (unless they ban yoga pants, then I’m out). A time for choosing…
Posted by Dan Cirucci at 12:09 PM