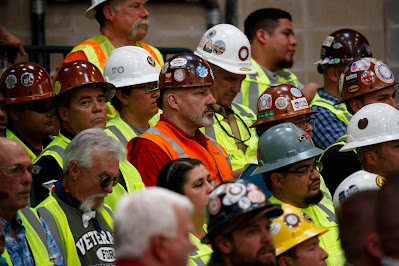 Did you know that Labor Day used to be the time for big parades? Yes, giant marches celebrating the might and muscle of working people and the goods and services they produced were the nor,. One of the biggest parades used to be held in Detroit.

Well, I’ve always loved parades. And since I grew up in what once was a gritty, riverfront industrial city, I do remember at least one parade celebrating labor.

I was just a kid at the time but I’ll never forget the big parade in my hometown to celebrate jobs. Sponsored by organized labor, the parade marched down Broadway in Camden (NJ) to herald the construction of the NS Savannah at Camden’s 273-acre New York Shipbuilding Corporation.
Above all, Camden was a blue-collar town. And it was solidly Democrat and pro-labor. Employment was always the defining “bread and butter” issue for Democrats. And keeping people working and creating new jobs – good jobs – was the essential mission of the Democratic Party. Indeed, “jobs” was the party’s mantra and Democrats rarely spoke on any issue without mentioning jobs.
With Labor Day here once again, I think of that day in Camden so many years ago. Of course, the heralded shipyard in Camden has long since closed along with some many other industrial giants that once dotted the city's waterfront. And I'm looking at hugely disappointing jobs figures for August (well below what was predicting) and seven months of lower after inflation wages under "Lunch Bucket Joe" Biden as I wonder what happened.
What went wrong? How did the Democrat Party of FDR, JFK and LBJ forget about working people and become the woke-centered party of tech tycoons, indulged celebrities, ivory tower eggheads, entrenched bureaucrats, suburban sycophants and corporate zillionaires who specialize in outsourcing jobs? What the hell happened?

Well, for one thing, Obama-Biden's record on the economy and jobs was dismal. Job growth was atrocious; more people dropped out of the labor force than ever before; the number of people on food stamps skyrocketed and GDP growth (such as it was) was embarrassing.

Also, more than 50 years after Dr. King's famous I Have A Dream speech the Black unemployment rate never really improved under Obama. The unemployment rate for African Americans soared to twice the national average and more than double the unemployment rate for whites.
But nobody on the left seemed to want to talk about these failures – not the liberal establishment, not the Democratic leadership and certainly not the labor movement.
Obama always argued that the economy was in a ditch, claiming “we’ve gotten it out of the ditch and want to put it in drive.” But the car never really seemed to be moving -- not the way it should be; not the way Reagan got it moving in the 1980s; nowhere near the way Trump got it zooming during his term and not even the way Clinton got it humming in the 1990s. Democrats and Big Labor only wanted to talk about wedge issues as they immersed themselves in the popular culture and the rotting realm of identity politics.

And then there was the biggest debacle of all : Obamacare. Originally, Big Labor got a pass on that. But there was an inherent phoniness about it and Obamacare caught up with us and started to implode.
There was a time when Democrats labor leaders were close to the people. There was a time when they actually worked alongside the people that they represented. Those days seem long gone. If you doubt that, just look at the continuing post-Trump appeal of the Republican Party among real, live, rank and file blue collar workers. Since 2010 the GOP  poll numbers have jumped 12 points among blue collar voters while the Democrats have lost eight points. That's a net switch of 20 points. That was enough for NBC News to conclude as follows: "There are signs across racial and ethnic demographic groups that Republicans are becoming the party of blue-collar Americans and the change is happening quickly." This would have been  unthinkable only a couple of decades ago.
What's more,  all of this has been happening as union membership has steadily dwindled. When the Savannah was built in Camden, labor unions represented a third of all workers. By 1983 the number had fallen to 20 percent. And by 2008 it was down to 12 percent and it has pretty much continued to drop since. For example, from 2019 to 2020 union membership dropped by another 428,000.
Why can’t the Democrats turn any of this around?
What happened to one of the central promises of traditional liberalism – jobs?
These are questions worth pondering once again this Labor Day.
FacebookTwitterPinterestShare
Posted by Dan Cirucci at 10:55 AM