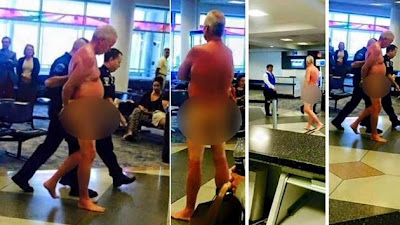 Charlotte has become one of the busiest airports in the country in recent years (it's an absolute mob scene) and one never knows what one will find there.
It can be truly scary on the eve of a busy holiday weekend.
Well, a man waiting to board his flight to Jamaica from Charlotte Douglas International airport stripped down to nothing after finding out his flight was overbooked.
According to a witness, the man then complained that his body felt like it was on fire.
The police took the man to the hospital for evaluation. He reportedly will not face any charges.
Posted by Dan Cirucci at 10:57 PM