Durr: Murphy Is Really The 'Dangerous' One 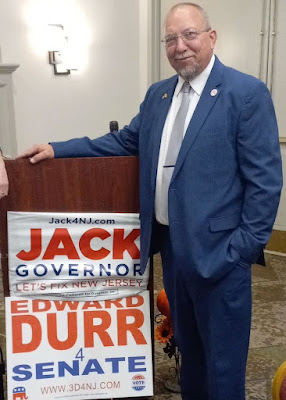 Upon learning Governor Phil Murphy referred to Republican gubernatorial candidate Jack Ciattarelli as “dangerous” for not conceding the election and saying that Ciattarelli was acting in a manner that was “not what America is all about” state Senator-Elect Ed Durr reiterated his position that Phil Murphy is the dangerous guy.
“For some reason Governor Phil Murphy has decided to show all of New Jersey how big a hypocrite he is.” State Senator-Elect Ed Durr said, “To refer to anyone who doesn’t concede an election as dangerous disgusts me. In any election we should wait for every legal vote to be counted before a concession is offered or victory is declared. That’s exactly why I have not declared victory over Senate President Steve Sweeney and have not expected a call from him to concede.”
“Murphy has not called on Sweeney to concede claiming he didn‘t know the math on the race. That statement is untrue given the fact our campaign consultant was quoted as saying ‘mathematically it’s over’ last week.” Durr added, “Murphy’s hypocrisy knows no bounds.”
“Phil Murphy is not what America is all about, he’s the dangerous guy who killed 10,000 nursing home residents and destroyed the lives of countless hardworking New Jerseyans,” Durr said. “The only reason Murphy wants a concession is so he can get back to work to see how many more lives he can ruin with his lousy policies.
“My differences with Senator Sweeney are political, not personal, I’m going to wait until every legal vote is counted before I declare victory because that is what America is all about. I suggest Murphy stop being petty and do the same for Jack Ciattarelli.”
Posted by Dan Cirucci at 1:34 PM