On The Eve: The Case For Jack Ciattarelli

After a week of early voting and a longer period of mail-in ballots, New Jerseyans will vote in person tomorrow and choose their next governor. Before long, we'll know how this all turns out.

Jack Ciattarelli is racing to a very strong finish. But for Jack this has been a marathon, not a sprint. He's been running for 22 months now. 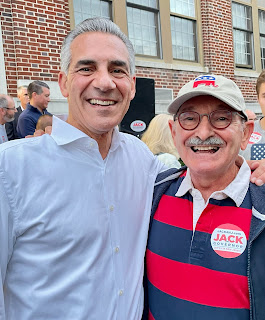 I've watched Jack throughout this process. In fact, I interviewed him last year when almost nobody knew who he was. Now, it's safe to say that he's at least as well known as his opponent.
I've had a chance to observe the man and the moment close up. Based on all that, here's what I can say:
1) He's got a plan.
Jack's a methodical guy. He's not capricious. He's followed a plan for this campaign -- a plan to win. He's also got a plan for our state -- a plan to make it better; a plan to make it the envy of the nation. He knows where he wants to go and how to get there.
2) He's a practical guy.
Jack is not an ideologue. Look at his campaign motto: "New Jersey's broken. We can fix it." Jack looks at problems and solutions. He sees something that's broken, something that's not right and he wants to correct it and make it work. This is simply his natural inclination. He's a problem/solution guy and he's goal-oriented. His whole life up to this point demonstrates that.
3) He's not a political insider.
Jack was not the choice of New Jersey's Republican establishment (aka the country club set) to be the party's standard bearer this year, just as he was not the choice in 2016. But that sort of thing serves as a challenge to Jack -- not an obstacle. That's just another hurdle for him to surmount and he relishes an opportunity like that. So, this year he was so ahead of the game that his likely opponents saw the handwriting on the wall and stepped aside. This left Jack to do what he does best -- make the citizens and taxpayers of the state his ultimate "insiders" as seeks their support and welcomes their counsel. 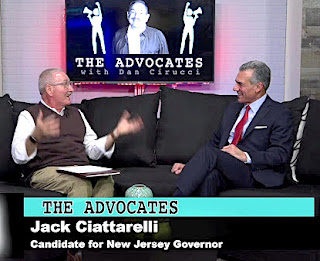 4) He's a people person.
The man honestly likes people and it shows. He's amiable and engaging. In fact, he's one of the most accessible political candidates I've ever encountered -- and I've known and worked for and with quite a few. His whole demeanor is welcoming and his warm smile instantly puts people at ease. He's at home in the company of others -- all others -- because he knows who he is and what he's all about. The man is well-grounded. There's an appealing authenticity about him -- a genuineness that never fails.
5) He's unflappable.
Did you watch him during the debates? There's a steadiness about Jack. He brings with him the sort of mien you look for in a leader. He's not easily distracted or rattled. But at the same time, he's certainly not taciturn or boring. He'll joke and banter and throw a riposte your way when appraise. There's a charm in all that.
This is a guy who's really success oriented. He's run against long odds before and won every time. He's built two hugely successful businesses. He likes to be underestimated and he thrives on the challenge that it presents.
Jack has run a relentless, focused, tireless campaign. I've never seen anyone make more campaign stops or work harder. He's indefatigable. But he never appears rumpled, flustered or flummoxed.
I watched him one night recently as he entered a crowded fund raiser and people gravitated toward him. It was the end of a long day but he still appeared fresh and crisp. Trim, nicely attired and personable, he looked and acted like a man who more than fits the role he seeks.
He's ready, New Jersey.
Are you?
Posted by Dan Cirucci at 8:01 PM