You As Angry As I Am? Here's Why You Should Be! 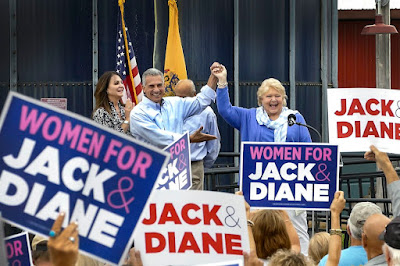 People are asking me about this crazy gubernatorial election in New Jersey. They ask me "What do you know, Dan?"

I'm not privy to any special, inside information about what happened on election day, election night or the time since.

But I do  know that Jack Ciattarelli was up by as much as 50,000 and overnight his lead evaporated.

And it seems to be the same old story: Republican districts count their votes and report their results promptly while Democrat strongholds hold back, seemingly wait to see how how things are trending and then, in the middle of the night or the next day (or even later) apparently come in with boatloads of votes for their candidate.

And, you know,  all of this is now that much easier to do with vote-by-mail, multiple voting days and a much looser chain of custody. It doesn't take a rocket scientist to figure this out. The longer the vote continues and the more hands touch the ballot the greater the chance for deceit and chicanery.

It makes no sense that the GOP scored incredible down ballot wins (and historic upsets) throughout the state while the man at the top of the ticket -- the guy who made it happen, the guy who busted his ass for every GOP candidate along the line -- somehow had to sit and watch his opponent declared the winner. It just doesn't jive. It doesn't add up!

The New Jersey GOP owes it to Jack and all of us -- owes it to democracy itself -- to fight like hell for Jack and Diane and for election integrity and to do it daily, relentlessly, without letup. No concessions! No consolation prizes.

Bottom line: every one of you oughta be damned angry, as I am!