That 'Inconvenient Truth' About Jersey Democrats! 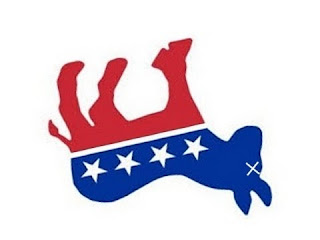 Here's a fact that the media conveniently overlook:
Since Brendan Byrne left office nearly 40 years ago no Democrat Governor of New Jersey has succeeded himself. None have managed to be re-elected.
Yes, I know we have been hearing over and over again that Joisey is solidly Democrat -- the bluest of blue states -- but facts are funny things.
And these are the facts: Democrat Jim Florio was turned out of office by the voters. Democrat Governor Jim McGreevey resigned from office in disgrace. Democrat Acting Governor Dick Codey was forced to step aside for zillionaire Jon Corzine. And Democrat Governor Jon Corzine was turned out of office by the voters.
This is not a pretty picture.
On the other hand, over the same period of time Republican Governors Tom Kean, Chrsitine Todd Whitman and Chris Christie were all re-elected.
So, don't let anyone ever tell you that Jersey is a slam dunk for the Democrats.
It isn't
Not then, not now and hopefully, not ever!
Posted by Dan Cirucci at 7:23 AM