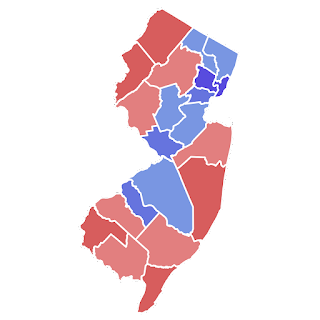 Votes are still being counted in New Jersey (gasp!) but we can nonetheless begin to  make some observations and draw some conclusions from everything that happened last Tuesday. So, in no particular order, here are ten big takeaways:
1) Virginia is no longer blue.
For quite some time (thanks to northern Virginia, aka NoVA) it appeared as if the Old Dominion had permanently moved into the blue column. But Glenn Youngkin's dramatic victory (and that of his diverse-ticket running mates) has moved Virginia into the purple column. Virginia is now in play once again.
2) New Jersey is still decidedly blueish.
Despite some stunning victories and startling upsets Tuesday, it will continue to be hard to break the Garden State of its Democrat addiction. Yes, those down ballot GOP victories were impressive but without the top of the ticket, this just won't have the sense of a true turnaround. New Jersey's big blue counties (where voters apparently vote like lemmings) still dominate and still fuel the state's corrupt and contented stench.
3) A barrel open at both ends.
Benjamin Franklin was right when he described Jersey that way. The New Yorkification of New Jersey dominates in the north where voters seem to harbor dreams of a one-party universe. And in Camden County at least, the Philadelphization of New Jersey remains strong under the iron grip of entrenched Democrat boss rule. But, we're happy to point out that . . .
4) Increasingly, Camden County appears to be an island.
Neighboring Burlington County is trending Republican as is Gloucester County as Democrat Senate and Assembly candidates have been defeated in both counties and the GOP makes inroads on county commission seats. Cumberland, Salem, Atlantic and Cape May are now all Republican. And further north and east, Ocean and Monmouth are certified GOP strongholds.
5) Mail-in voting is a bummer.
There used to be something called Election Night. Candidates and supporters gathered, votes, were counted, totals were tabulated and we usually knew who the winner was before the night was over. Now, mail-in voting has made a mess of all that. It's like we're in a permanent, nebulous, "no-winner" zone. It's unsettling -- and a prescription for trouble since it erodes trust in the process.
6) Early voting fizzled.
New Jerseyans just didn't take to to. The fact that it went on for so long ( a week or so) didn't seem to help and most people didn't even know where the early voting sites were. The locations seemed puzzling in some cases. For example, voters in sprawling Cherry Hill had no early voting site and had to go to smaller towns nearby. Probably best to sunset this dubious experiment.
7) Joizee deserved more attention.
The elites who control the media and the fat cats who control big pursestrings were all focused on Virginia which naturally gains attention because of its proximity to the inside-the-beltway crowd. But in the stretch, it was pretty clear that Virginia was going red. There were only two big statewide elections in the country. Why wasn't more attention (and money) lavished on New Jersey? It could have made for more upsets and a bigger GOP win. But Joizee gets no respect.
8) The rising, red south roars.
South Jersey is leading the Republican resurgence and provides a blueprint for the nation. With its many small towns and rural areas it's prime GOP territory and counties like Atlantic, Cape May, Gloucester, Salem and Cumberland are giving the GOP solid, appealing candidates. They're also providing their share of fresh, young faces and new ideas. Hooray!
9) Call it the red sea.
All along Jersey's shoreline from Cape May all the way up to the Highlands, New Jersey is red. It must have something to do with that fresh salt air. As a general rule Republicans are tougher, saltier, more authentic and more durable than their counterparts on the other side. And, they cherish the beckoning openness of their beloved Jersey shore. That's our bulwark against tyranny.
10) The future looks bright.
Though there's still a lot of work to do (and lingering heartache) the future looks brighter for Jersey Republicans than it did last week at this time. Still, we're up against some nefarious characters. And never forget this: The longer the voting (and vote tallying) goes on and the more hands touch the ballot and the more the ballots are moved about, the greater the chance for mistakes, mendacity and mischief! Beware!
And one more very important thing:
If it demonstrated nothing else, this election showed that Republicans must speak out strongly with a clear conservative message, even on the hot button cultural issues. We must paint with bold colors. Or, as our friend Senator Mike Testa reminds us: You can't beat vanilla with French vanilla. Avanti!
Posted by Dan Cirucci at 3:36 PM