Yo, Philly: No Cars In Center City During PopeMania! 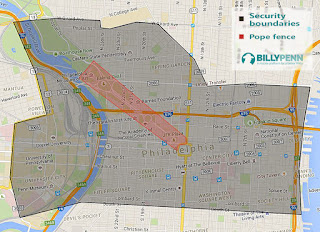 Center city Philadelphia will be basically closed to auto traffic during the Pope's visit for the World Meeting of Families in September.
The map above reportedly shows the areas (in gray) that will be closed to autos and the security area (in red) that will be fenced in. Sources say the Benjamin Franklin Bridge will be closed as well.
Officials are saying you should think of it like this: There will be a snowstorm for two days (September 26 and 27) and the city will be inaccessible. You can use you feet or limited public transit to get around. That's it.
The gray, no-car area will probably fall as follows: From Girard to Ridge to Spring Garden to the north, South Street to the south, the Delaware River to the east and 38th Street to the west.
That's a very sizable chunk.
This is going to be massive, folks.
And it's going to inconvenience a lot of people over the weekend in question.
If you want to see the Pope, be prepared to walk. If not, your best bet is probably to get out of town.