Have You Done THIS Yet? Have You?

With Gov. Murphy mandating that this election be conducted by VBM, it's all the more important that we follow through and support our great Republican candidates. That's why I put my ballot in the mail today during my weekend bike ride through LBI. Don't forget to vote by July 7! pic.twitter.com/DGi6x1Cdpa
— Jack M. Ciattarelli (@Jack4NJ) June 27, 2020

Posted by Dan Cirucci at 5:01 PM No comments: 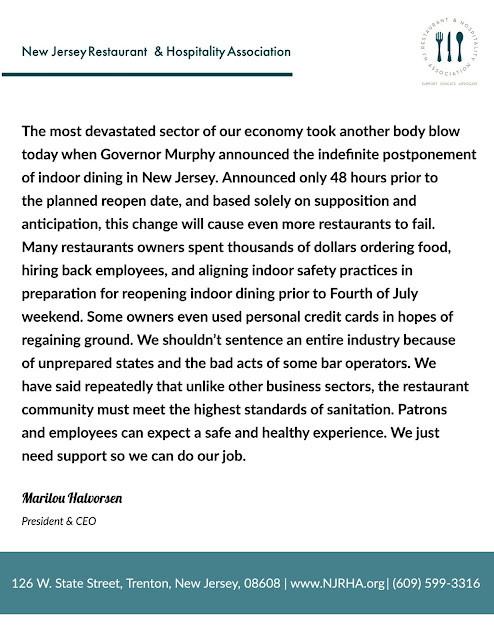 Posted by Dan Cirucci at 4:50 PM No comments:

Statement by New Jersey Congressman Jeff Van Drew about Governor Phil Murphy's decision to indefinitely delay the indoor reopening of restaurants and gyms in the state.

This is no longer about safety. This is Governor Murphy forcing businesses to die; businesses that just spent months investing and preparing to open at a time he gave his word to them on. The restaurants placed food orders, bought PPE, hired staff back, and started advertising.How is going to a busy big-box store any safer than a prepared restaurant?To compare us to other states undermines the pain and the work that went in to keeping us at the diminishing virus levels we are currently at. It does not represent any sense of reality in New Jersey.I am completely disgusted and my heart aches for the pain these business owners are feeling after their dreams are being smothered by Governor Murphy’s cruel change of mind.

Posted by Dan Cirucci at 4:33 PM No comments:

And Now, For the Days REALLY BIG Question!

While Joe Biden was doing that fake ‘everyman’ routine for years, did anyone ever ask him how he was able to afford this enormous mansion while he was on a government salary for 50 years? pic.twitter.com/ga0Ym2nT4H
— MARK SIMONE (@MarkSimoneNY) June 29, 2020

Posted by Dan Cirucci at 7:51 PM No comments:

Have You Thought About THIS Lately? 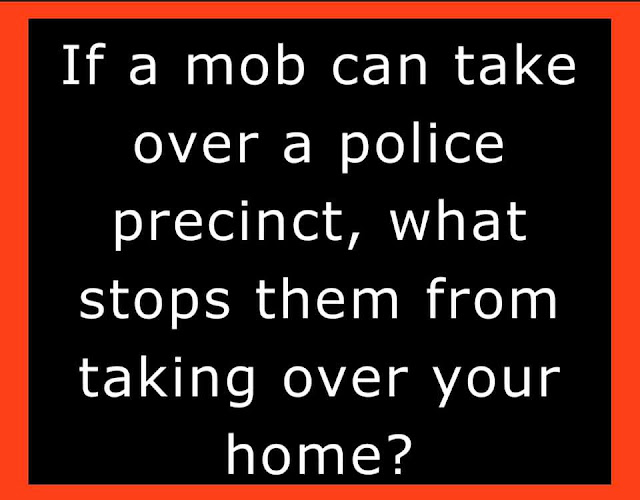 Posted by Dan Cirucci at 7:45 PM No comments:

Anarchy In Our Streets Will NOT Be Tolerated!

Posted by Dan Cirucci at 7:29 PM No comments: 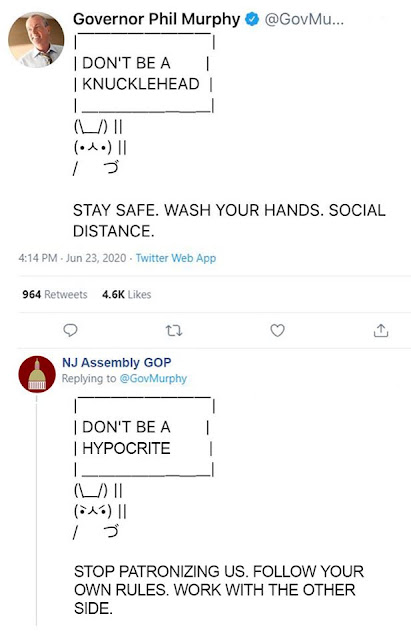 Posted by Dan Cirucci at 7:25 PM No comments:

Zionist Organization of America (ZOA) President Morton A. Klein and ZOA Chair Mark Levenson, Esq. released the following statement:
The Zionist Organization of America demands an apology and retraction from Union of Reform Judaism (URJ) President Rick Jacobs and other Jewish leaders for libeling ZOA President Morton Klein. After Mr. Klein appropriately called out the Black Lives Matter (“BLM”) organization’s virulent, institutional antisemitism, other discriminatory hatreds, and anti-Israel blood libels, enshrined in the BLM/M4BL (Movement for Black Lives) platform, Facebook page and activities, URJ’s Rick Jacobs called Mr. Klein a “ racist ” and “ Islamophobic ” in articles printed in multiple newspapers. URJ/Jacobs also invoked these libelous names to condemn ZOA’s membership in the Conference of Presidents of Major American Jewish Organizations (the “CoP”) – an organization that the ZOA co-founded! Certain other leftwing Jewish leaders from the Reform and Conservative Jewish groups, women’s groups and Ameinu, whose president is treasurer of the extremist J Street, and the pro-BDS Peace Now and Workmen’s Circle also signed a letter (see below) falsely accusing Mr. Klein of promoting “hate in organized Jewish life,” and issued numerous similar tweets and website postings.
In sum, Rick Jacobs and those other Jewish leaders are essentially, absurdly, irrationally, and libelously saying that accurately calling a racist, antisemitic, Israel-hating organization “antisemitic” and “anti-Israel” makes one a “ racist ” and an “ Islamophobe” who promotes “hate.”
These attacks by Rick Jacobs, etc. never give any reasons why Mr. Klein’s criticism of the BLM group’s antisemitism is wrong or false or inaccurate. They provide  no  facts to back up their name-calling or disparagement. Jacobs and others simply call Mort Klein names, with no explanation.
Moreover, these inappropriate public attacks on Mr. Klein by certain Jewish leaders may be endangering Mr. Klein and his family. Mr. Klein has already received threatening phone calls to him and his family. This is intolerable and frightening. In this era of raw sensitivities and heightened antisemitism, inappropriate attacks and name-calling of Mort Klein, such as those leveled by Rick Jacobs, etc. against a Jewish leader, must not be tolerated and must stop and be retracted.
We believe that these attacks are intended to silence, censor, demonize and marginalize Mr. Klein and ZOA for our strong pro-Israel political views, which are fiercely opposed by URJ, Jacobs, and the letter’s leftwing signatories. We believe these signatories want to diminish the credibility of ZOA and Mort Klein, while appeasing the Israel-hating BLM group. We believe they are afraid to criticize the BLM org., fearing this will antagonize them and provoke them to more hostile actions. But as history shows, appeasement always fails. Journalist Melanie Phillips  noted  that in “ an atmosphere redolent of the 17th century Salem witch trials ,” those, such as Mr. Klein, who criticize BLM’s anti-Jewish, insurrectionist side, are called “ racist “ and “ a Twitter mob then assembles to strip such people of their reputation, platform or job for the crime of telling the truth .”
The attacks on ZOA and Mr. Klein also violate the rules of the Conference of Presidents of Major American Jewish Organizations, which URJ and the letter’s signatories agreed to.
Rick Jacobs/URJ’s name-calling is patently ridiculous, as well as dangerous.  It is known that Morton Klein fought for Black civil and voting rights, attended numerous sit-ins and rallies for Black voting and civil rights, helped register Black voters, and was arrested in Mississippi for doing so.
As a child of Holocaust survivors born in a displaced persons camp in Germany, who lost most of his family, including his grandparents, to the worst hatred and racism in history, Morton Klein knows first-hand the tragic results that unbridled hatred and racism can cause thus being acutely sensitive to hatred and racism.
Condemning the antisemitic BLM organization is not a condemnation of Black people’s lives — it’s a condemnation of the BLM group’s antisemitic platform. Black people’s lives do matter, immensely.
ZOA and Morton Klein  condemned  the horrific killing of George Floyd and racism with all our hearts, and promoted police reform.
ZOA and Mr. Klein also appropriately condemned the attacks on innocent police officers; the widespread looting and riots; and the Black Lives Matter-led pogrom with its destruction of numerous Jewish businesses, and defacing and damaging of about a dozen synagogues and Jewish schools in Los Angeles, including painting the words “F--- Israel, Free Palestine” on synagogue walls.
Courageous, highly-respected journalists and academics, including liberal Harvard Law Professor Alan Dershowitz, Melanie Phillips, Caroline Glick, Jonathan Tobin, Ruthie Blum and Joel Pollak, have all condemned BLM.

Posted by Dan Cirucci at 7:22 PM No comments: 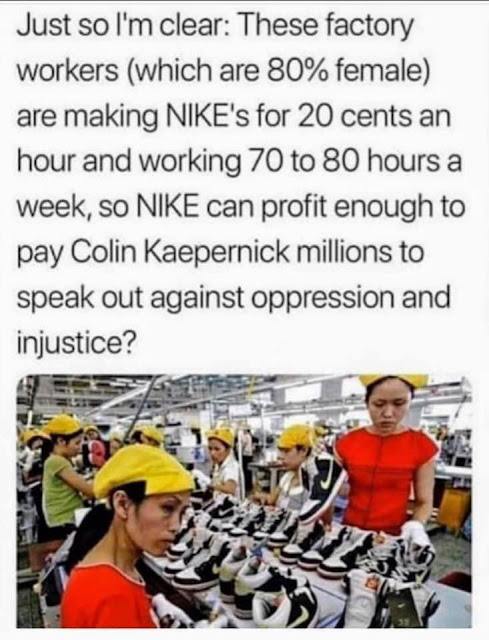 Posted by Dan Cirucci at 7:05 PM No comments:

Posted by Dan Cirucci at 4:49 PM No comments: