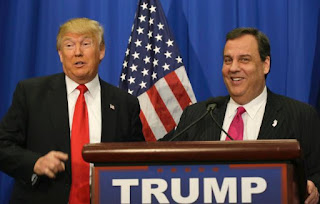 Why does everyone seem so surprised that Chris Christie today endorsed Donald Trump for president? Why?
It's neither surprising nor shocking. Not in the least.
In fact, we saw it coming some time ago.
But anyway, let's try to explain why this really happened:

1) If they can't win, politicians at least like to support the winner. It makes perfect sense. Can't win? Then, be close to the one who does win and get some real credit for it. Trump is the odds-on favorite to get the GOP nomination. Christie understands this. He gets it. So, go with Trump and do it early to get the most out of it.

3) Trump out Christied Christie when it came to straight talk. Christie invented the game; Trump mastered it. Christie pays homage to the street-talking/straight-talking champ.

4) There was no way Christie was going to endorse a U. S. Senator. He sees the Senate as an elite, closed club of irrelevant bloviators - a haughty debating society that he wants no parts of.

5) Christie for Vice-President? Nah! Christie's just not cut out for the role and both Chris and The Donald know that. But Christie might like to be Attorney General. That would do the trick and, if Trump wins, this is Christie's best chance to snag the job.

6) Christie loves celebrity. Trump is a huge celebrity. Christie's aphrodisiac of choice is the spotlight. Trump seizes, holds and masters the spotlight every time. Short of hangin out with Springsteen, standing alongside Trump is probably the closest thing to heaven on earth that Christie can imagine.

7) Ivy-leaguer Ted Cruz is too far right and too detached for Christie. And Rubio hurt Christie big time in New Hampshire when Rubio's PAC went after Christie. Christie retaliated by derailing Rubio in that critical debate. That counted for something with Trump and (whether or not a deal had already been cut) the alliance was sealed.

8) Pay attention. Christie rarely spoke ill of Trump and Trump was mostly easy on Christie. They've almost always called each other friends. The telltale signs were already there.

9) No way was Christie going to support Kasich. By coming in a strong and surprising second in New Hampshire Kasich deprived Christie of the one state he might have won -- a victory that could have given Christie an early leg-up on the other nonTrumps.

And then there's one more thing.
Christie now seems bored and distracted in New Jersey. The role of lame duck simply doesn't suit him and it's no fun to be so far down in the polls in your own state, especially after you've reached stratospheric heights.
So, suppose that once Trump gets the nomination he chooses Christie as Chair of the Republican National Committee. It's a nice, national stage exit strategy for Christie.
If Trump wins the Big Job, Christie's well-positioned to become AG. If Trump loses, Christie did everything he could to elect the GOP candidate and then Christie probably feels that would leave him well positioned to run for president himself in 2020.
Stranger things have happened . . . . .
Posted by Dan Cirucci at 3:51 PM

As always, spot on Mr. Cirucci. Hope all is well.