Who Exactly IS Tim Kaine, Anyway? 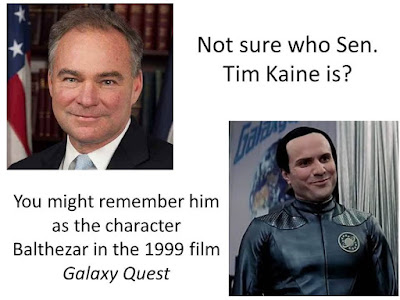 And there's more.
How about THIS:
Virginia Sen. Tim Kaine took advantage of the state’s lax gift laws to receive an $18,000 Caribbean vacation, $5,500 in clothes and a trip to watch George Mason University play in the NCAA basketball Final Four during his years as lieutenant governor and governor, according to disclosures
Hillary Clinton’s running mate, Kaine reported more than $160,000 in gifts from 2001 to 2009, mostly for travel to and from political events and conferences, according to disclosures compiled by the Virginia Public Access Project. The givers included political supporters, a drug company that soon after bought a facility in Virginia, and Dominion, the state’s biggest provider of electricity.
Posted by Dan Cirucci at 8:34 PM