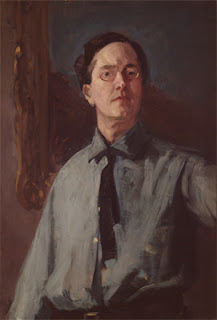 Over the weekend I had a chance to view "Seeing The City: Sloan's New York" at the Delaware Art Museum in Wilmington. http://www.delart.org/ Originally from the Philadelphia area, John Sloan studied at the Pennsylvania Academy of the Fine Arts and moved to New York in 1904. His life in Chelsea and Greenwich Village provided the subjects for paintings, prints, and illustrations from 1905 through the 1940s.
The exhibition focuses on Sloan's images of New York, presenting an in-depth view of his years in the city. Seeing the City draws on the rich resources donated by Helen Farr Sloan to the Delaware Art Museum, including works of art and the John Sloan Manuscript Collection. One critic has said that Sloan's New York paintings helped to create the "slang" of the city and the New York that people came to know in the early years of the 20th century. These are wonderfully evocative paintings and drawings that vividly depict urban life and reveal Sloan's love of and concern for New York during a period of rapid change and upheaval.
As an avid walker myself I enjoyed discovering that Sloan often painted from a pedestrian's point of view. He also depicted the city's rooftops and painted scenes that he witnessed through doors and windows years before Alfred Hitchcock's voyeuristic masterpiece "Rear Window."
I'm not sure whether you'd call Sloan a realist or a naturalist or whatever. I just know that the exhibit is wonderful and I highly recommend it.
Image of John Sloan: Online Gallery, Delaware Art Museum.
Posted by Dan Cirucci at 8:57 AM