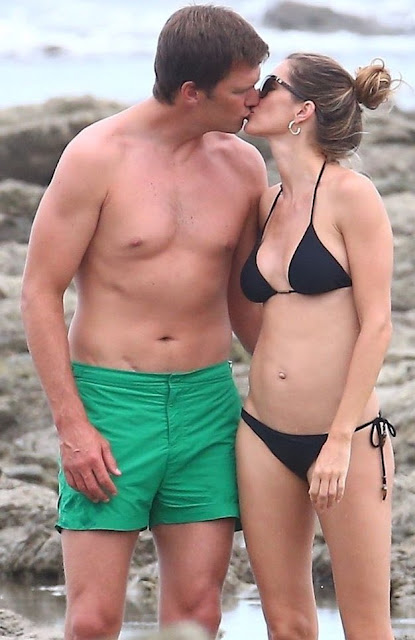 OK.
So, here's a recent photo of Patriots quarterback Tom Brady and his super gorgeous and sexy wife, Gisele.
We're pleased they're enjoying themselves and seem to be in love.
And we say that even though we aren't Patriots fans. Still, we do recognize Brady's talents and we also recognize that his wife reportedly earns even more than he does as she is an international super model.
What a couple!
Anyway, people are criticizing Brady for being out of shape.
They're saying he has a "dad bod" and not the toned body of the man who's been called one of America's finest athletes.
Hey, Tom Brady will be 41 years old next week. He's played in the NFL for sixteen seasons during which he's quarterbacked the Patriots to eight Super Bowl appearances, the most for any player in history. His completion percentage is an astounding 63.9% and he's completed 5.629 passes.
Obviously, he taken some mighty hits and falls over his career.
Whether you like him or not, whether you're a fan of the Patriots or not, we think you'd have to admit that, all things considered, Tom Brady looks just fine. And, we congratulate him on his incredible success.
And, this too: It's refreshing to see an athlete without any obvious tattoos!
Posted by Dan Cirucci at 8:17 PM