What WILL It Take To Bring Down Trump? 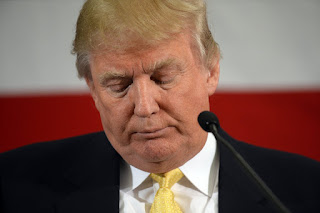 What will it take to bring down Trump?

What WILL it take?

Well, to begin with, it must be recognized that it's damned difficult to separate Trump from Trumpsim and Trumpsters. We're talking about a pop culture, socio-political phenomenon unlike anything we've seen in recent times.
President Trump presides over a grassroots movement that is composed of millions of loyal and attentive followers who are unlikely to break ranks. These followers include huge numbers of voters who have never before been involved in such a movement of any type and it also includes many who haven't even voted or taken any interest whatsoever in politics before this.
They are in it because of, for and on behalf of TRUMP.
And they are likely to remain welded to the man and his mission while not taking kindly to anyone who gets in the way of either.
Democrats, liberals, socialists, even independents will not be effective in peeling Trump loyalist away from Trump. Only Trump can do that. And it would take something truly drastic on his part to bring that about -- something way, way, WAY worse than anything we've seen so far.

So, Trump's troops are, as far as anyone can tell, solid, mobilized and ready to march forward into the 2018 election campaign.
As long as this is the case, this is a formidable army -- one that presents a huge challenge for the Democrats. Remember that this army operates outside the mainstream and outside of traditional norms and practices. This is a digitized army empowered by Trump's mastery of social media and its complete opposite -- person-to-person, neighbor-to-neighbor and friend-to-friend communication.
Now, when you consider that the economy is booming and that economic news is likely to continue to be unprecedentedly positive into the fall, this army is likely to be bolstered by a significant number or voters who identify themselves as independents. Plus, even some more traditional Democrats (turned off by the radicalism of Ocasio-Cortez, Maxine Waters and others) are likely to #WalkAway from the Dems when the time comes to vote.

So, again: What will it take?

Well, maybe it will take a sort of Trump fatigue.
People will have to become tired of Trump and his tweets and his accusations and his outbursts and legal wrangling and the headlines and gossip and hurled invectives that surround all this. People will have to become concerned about a growing sense of instability. People will have to begin to worry that the Disrupter in Chief has gone too far -- that he's disrupted too much; that he's alienated too many; that he's created too much havoc; that he has sowed the seeds of too much uncertainty.
And that concern will have to begin to turn to fear if it is to trigger any kind of effective push back.
Fear is a powerful motivator -- especially when everything else is going fine. And fear grows in a hothouse of random anxiety -- an unanchored sense that things are just becoming too unpredictable, too shaky, too worrisome.
Indeed, the notion can even take hold that things can't possibly be this good and that something akin to an earthquake must surely be rumbling just under the surface.
It's hard to tell exactly when something like this begins to take hold. It doesn't have a rational timeline. It's more psychological than that. And don't thing the Democrats' solid allies in the media can't or won't help this along, because they can and they will.

But, in the end, this is the Democrats' only hope -- and ditto for the media and the elites. They must create a growing field of fear that gives increasing numbers of people a set of jangled nerves and gets them worried about imagined outcomes.
Be sure of this: Bereft of real issues, this is precisely the course the Democrats and their friends have chosen. Right now, it's their only option.
So, they want you to be afraid -- to be very afraid. They want you to be afraid of economic collapse or global warming or civil war or even a nuclear holocaust. And that's why they're shouting and screaming and blockading and demonstrating and polarizing and obstructing as much as they can. The more chaotic and perilous things seem, the more likely you are to be afraid.
This is precisely the scenario they seek.
Be forewarned -- and buckle up!

I don't see that Trumps tweets are so outrageous. Our Media is "Fake News" as he has put it so bluntly. I knew this for several years before Trump ran for the Presidency. Myself and many of my friends had to rely on foreign news to get the truth of what was really going on. As for many of the remarks he has made about certain women; they were disgusting, not only to him but to me and many others as well. So what is the gist of the problem with Trump? Is it the transparency that the last administration campaigned on and promised yet never delivered ? Obviously, yes. The current administration has had to deliver on the broken promises of the last administration and without collusion of media heads only to be attacked and accused of what the last administration actually did ! What kind of mindset is this that will do actual evil against it's people and then make false accusations to those that are working to undo the evil? Those involved in sedition.