The Slippery Slope To The Death Of An Icon 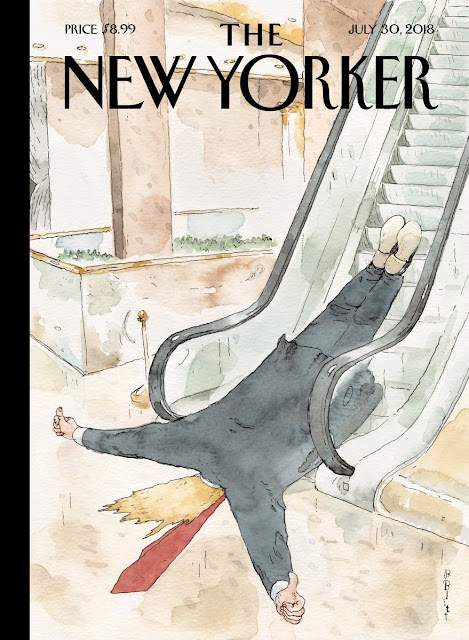 Once upon a time there was a magazine called The New Yorker.
The magazine had an erudite approach to the world. That's a word you don't hear much anymore -- erudite. The magazine was sophisticated and, for the most part, knowledgeable. And it was also exceptionally well edited.
The New Yorker was the place you went to for witticisms.
The New Yorker dealt in clever asides and original, cogent humor.
Its editors and writers were of the highest order. The names of those editors and writers are legendary: William Shawn, Lillian Ross, Marry Norris, James Thurber, Truman Capote, Nora Ephron, Nat Hetnoff, E. B. White, H. L. Mencken, James Baldwin, Mary McCarthy, Robert Benchley, John Cheever, Edna Ferber,  J, D. Salinger and so many, many others.
The New Yorker's point of view was that of a slightly jaded but nonetheless learned and inquisitive observer -- sometimes world weary but always engaging and often surprising.
The magazine didn't follow a set ideology and it never shouted or harangued or pushed a single mindset. It also never hesitated to laugh at itself, presenting a tongue-in-cheek approach from time to time.
But all that has long since changed.
There's nothing unique or original about today's New Yorker. And the latest round of salacious stories show that the magazine clearly has no sense of journalistic responsibility. None whatsoever.
Like much of what passes for journalism these days, The New Yorker is baldly partisan, dogmatic, mean-spirited, relentless, shrill and terminally cynical. More often than not, what humor it does deliver is just this side of brutal.
All this is sad because the magazine has become an ongoing polemic. Its subtlety and sophistication have been replaced by sensationalism and self-aggradisment. And it thinks nothing of engaging in a barely veiled sort of character assassination.
And these are just a few reasons why I stopped reading it years ago.
Truth to tell, I haven't missed it one bit.