When Exotic Birds Made Their Home In Cherry Hill

Yes, it's true. Though it would hardly qualify as tropical (or even semi-tropical) Cherry Hill was once the home of a wide variety of vividly colorful exotic birds. And people came from far and near to delight in the birds' daily activities.

South Jersey's Cherry Hill Mall has remained a premiere shopping destination for nearly 60 years -- so much so that's it's not only iconic but has also survived the demise of countless other indoor shopping meccas throughout the country. When it opened in 1961 as the first mall east of the Mississippi it was a unique attraction and not just because it boasted a year round spring-like indoor climate. It also featured numerous water fountains,  live tropical greenery and a towering aviary where exotic birds cavorted with seeming abandon. But as you can see, the birds didn't get very far as they were domiciled in a modernesque 20-foot high cage. 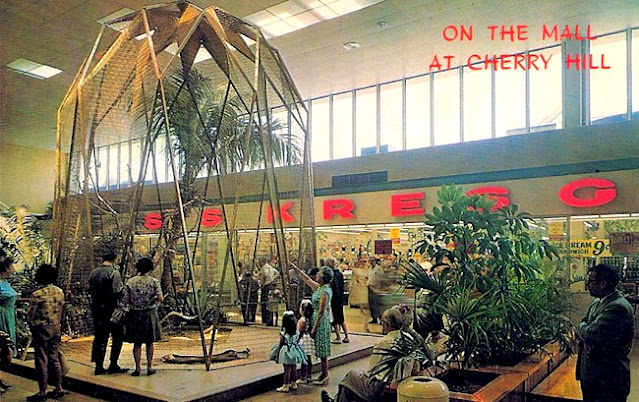 This  aviary stood just outside the sprawling S. S. Kresge store, a sort of discount forerunner of K Mart. Today, this would be the area between the mall's center court and JC Penney. People came from far and near to see the birds and to be part of the mall's lush environment. They were attracted by a radio advertisement jingle that went like this:

On the mall, on the mall
On the Cherry Hill Mall
It's spring in the summer, winter and fall.
You can shop, you can stroll
Where the weather is grand
At Cherry Hill, Cherry Hill
Your new spring wonderland!
What happened to the aviary and the birds? The same thing that happened to nearly all of the stores that were there when the mall opened. They're gone. They've been replaced by other, newer stores that meet the demand of today's market
Times changed and the mall had to change to keep pace. Bottom line pressures, competition and the proliferation of other attractions as well as changing tastes forced the mall to cede more space to retail and give up some of its more "exotic" elements. Safety and sanitary considerations likely played a role in the aviary's demise as well. Nowadays, the very notion of caged birds (however capacious or unusual the cage may be) strikes a discordant note.
That's not to say you still won't find some birds in the Cherry Hill Mall from time to time. But they're just the commonplace wrens and the like that wandered in from outside. Enjoy!
Posted by Dan Cirucci at 9:59 PM