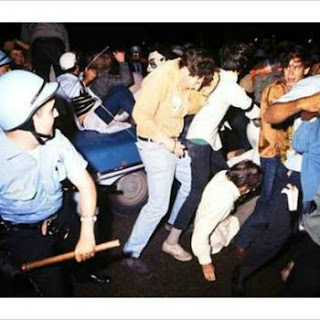 A lot of people are comparing this year, politically and culturally, to 1968 because it seems that what's happening now to the GOP happened then to the Democrat Party.

I know because I was there. I walked up and down streets and knocked on doors and worked in presidential primaries in five states in 1968. I participated in various marches and protests. I was on the streets of Chicago during the uprising (and inside campaign headquarters) during the 1968 Democratic National Convention. And I swallowed hard, rolled up my sleeves and went to work in the general election in November -- a real thriller and a cliffhanger.

And I was a young, idealistic college senior who was opposed to the seemingly endless war in Vietnam and committed to sweeping changes that would make America a freer, more equal, more just, more united, more productive nation.

Yes, I was a staunch liberal at a time when liberalism was at a crossroads, just as conservatism is at a crossroads now. And the Democrat Party was seriously split then just as the Republican Party is seriously split now. And there was a groundswell -- an upheaval -- in the Democrat Party just as there is now in the GOP. And people were angry and frustrated with the Democrat president and the party's leadership and that anger and frustration found voice in an unlikely leader -- a seemingly soft-spoken intellectual senator from Minnesota who dabbled in poetry was surprisingly contemplative for a successful politician.

His name was Eugene McCarthy and he was the first significant elected official to come out against the continuing escalation of the Vietnam war and campaign for president on that platform. He wasn't loud and demonstrative like Donald Trump or Bernie Sanders. But he was still a huge menace to the establishment.

Nobody -- nobody -- gave him a chance. He was going up against the party apparatus and a very powerful president, Lyndon B. Johnson.

Similarities to Trump? Well, yes. McCarthy seized on a single issue. He crystallized people's anger and frustration and gave it a voice and a face. His emergence took the form of a movement. His followers were ardent, to say the list. They followed him with a sort of mesmerizing fervor. And, he was truly fearless in bucking the tide. Indeed, his movement gained rapid momentum and startled the nation. It was truly galvanizing.

And I was one of his most passionate followers. I campaigned for McCarthy in New Hampshire (where we embarrassed the president in the primary there) and Indiana, New York, New Jersey and Pennsylvania. I also participated in demonstrations to end the war.

But like most of the "McCarthy kids," as we were known, we were committed to working through the system --not in the streets but through the established political structure. We worked it the old-fashioned way, the American way -- through the ballot box.

1968 was a year of tremendous upheaval -- campus riots, nationwide demonstrations for peace and civil rights, two assassinations (Bobby Kennedy and Rev. Martin Luther King, Jr.) and nearly 17,000 Americans dead in Vietnam. It was the single bloodiest year of the war. Put simply, 1968 was a violent, bloody mess. Fathers were pitted against sons and, with the emergence of the women's movement, mothers were pitted against daughters and husbands against wives as well. It was a highly polarized time. Many people really felt the country was coming apart.

Through it all, I kept my faith with the electoral process. I felt strongly that we needed to persuade people of the value of our cause and we needed to work, vote-by-vote through the state primaries and into the general election. And that was the tact taken by McCarthy as well.

Still, in 1968 (unlike today) not all of the convention delegates were chosen by the people through the primaries. Many were determined by party leaders and elders and powerful brokers. And other delegates ran and won as "uncommitted" delegates who would decide how to vote on their own (or at the direction of party bosses) when they got to the convention. The reforms that brought about the current, more democratic system were in response to 1968.  They were not in place at the time.

In March, President Johnson (who almost lost the New Hampshire primary to McCarthy) decided not to run for re-election. In June, Robert F. Kennedy (who entered the race as the second anti-war candidate after McCarthy paved the way) was shot and killed on the night he won the California Democratic presidential primary.

In August, the Democratic National Convention in Chicago was a mess with rioting in the streets and mayhem inside and outside the convention hall. In the end, the weary delegates rejected McCarthy and nominated Vice President Hubert Humphrey for president.

I was disappointed, disheartened, truly disgusted. I didn't even want to look at Humphrey or his supporters. I couldn't stand the sight of him or them. No way! I felt it had all been wrongly taken from us.

But democracy is a tough, tough business.

It isn't always cut and dried.

It's about choices. We have to make choices.

We live in a democracy and we make democracy work by making choices -- individually, and together.

So, as autumn approached, I made my choice. I couldn't vote for the GOP nominee, Nixon. He was devious, evasive, untrustworthy. Not that Humphrey was exactly golden -- far from it. But he was closer to what I wanted. So, I rolled up my sleeves and went to work for Humphrey. In the process I met some wonderful people and made lifelong friends and we came thisclose to winning. After all the rancor and division within the party, that was truly quite incredible.

1968 was way more polarized, way more divisive and violent and bloody and out-of-control in ways that can't even be compared to now.

And it taught me a great deal -- about standing up for what I believe in, about winning and losing, about facing uncomfortable realities, about the choices we have to make and yes, about surviving.

So, when people ask me what about this year I tell them, first and foremost that the sky is not falling. America will be fine. We've seen far, far worse than this. We've been far more divided and in much, much, more perilous situations.

I tell them to trust in the process. I urge them to participate and, individually and together, let the people decide. Let them choose. Democracy will take its course.

And, though I'm now in the other party, I will once again support the nominee of my party.

I urge you to do the same!