Remembering The Words Of A Woman Of Faith 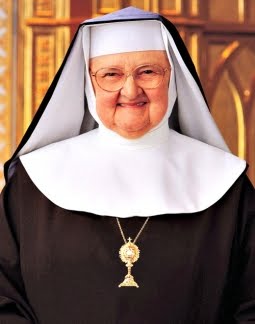 "My God, You are my anchor on a stormy sea, my serenity on a windy night, my hope when all else fails. Your Presence surrounds me like a protective shield and when the arrows of my selfishness pierce through, Your loving arms extend themselves to reach out and grasp my wandering soul." - Mother Angelica

"The Father wants to look down and see His image on your soul. This is the purpose of Christianity."
- Mother Angelica

"Faith is what gets you started. Hope is what keeps you going. Love is what brings you to the end."
- Mother Angelica

The Christian vocation is simple: you are first a child of God, and the state of life where God has placed you is the source of your holiness."
- Mother Angelica

"Boldness should be the eleventh commandment."
- Mother Angelica


The Catholic Church in the United States has lost the Poor Clare nun who changed the face of Catholicism in the United States and around the world. Mother Mary Angelica of the Annunciation, foundress of the Eternal Word Television Network (EWTN), passed away on March 27 after a lengthy struggle with the aftereffects of a stroke. She was 92 years old.

“Mother has always and will always personify EWTN, the network that God asked her to found,” said EWTN Chairman and Chief Executive Officer Michael Warsaw. “Her accomplishments and legacies in evangelization throughout the world are nothing short of miraculous and can only be attributed to divine Providence and her unwavering faithfulness to Our Lord.”

In 1981, Mother Angelica launched Eternal Word Television Network, which today transmits 24-hour-a-day programming to more than 264 million homes in 144 countries. What began with approximately 20 employees has now grown to nearly 400. The religious network broadcasts terrestrial and shortwave radio around the world, operates a religious goods catalog and publishes the National Catholic Register and Catholic News Agency, among other publishing ventures.

“Mother Angelica succeeded at a task the nation’s bishops themselves couldn’t achieve,” said Archbishop Charles Chaput of Philadelphia, who has served on EWTN’s board of governors since 1995. “She founded and grew a network that appealed to everyday Catholics, understood their needs and fed their spirits. She had a lot of help, obviously, but that was part of her genius.”

“In passing to eternal life, Mother Angelica leaves behind a legacy of holiness and commitment to the New Evangelization that should inspire us all,” said Carl Anderson, Supreme Knight of the Knights of Columbus. “I was honored to know and be able to assist Mother Angelica during the early days of EWTN. Over the years, that relationship grew, and today the Knights of Columbus and EWTN partner regularly on important projects.”

“Mother Angelica was fearless because she had God on her side,” Anderson added. “She saw what he needed her to do, and she did it! She transformed the world of Catholic broadcasting and brought the Gospel to far corners of our world. That witness of faith was unmistakable to anyone who met and worked with her, and generations of Catholics have and will continue to be formed by her vision and her ‘Yes’ to God’s will.”

Click here for more from the Catholic News Agency.
Posted by Dan Cirucci at 1:57 PM