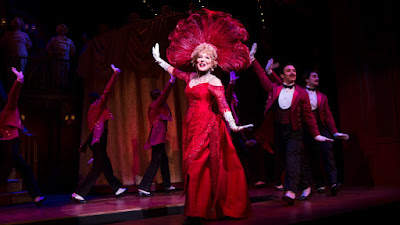 Hello Dolly with Bette Midler opened on Broadway last week and it has taken the town by storm.
Every reviewer has lavished praise on this new production of the classic 1964 musical -- a 53-year-old gem with a 70+ year-old star.
Forget the rap or hip hop (or whatever it is) around the corner or that millennial musical homage to social media, because Dolly is back in town and she's the new toast of Broadway.

Here's a sampling of the reviews:

Ben Brantley - New York Times:
The pinnacle of fine dining in New York these days can’t be found in a Michelin-starred restaurant, though it will probably cost you just as much. No, you’ll have to get yourself and your wide-open wallet to the Shubert Theater, where the savory spectacle of Bette Midler eating turns out to be the culinary event of the year.

Marilyn Stasio - Variety:
The audience claps at the overture and whistles at the set; and when Bette Midler makes her entrance, everyone falls into a dead swoon. “Hello, Dolly!” is back on Broadway, and it looks so fresh, you want to pinch its cheek.

Maya Stanton - Entertainment Weekly:
How to describe a force of nature? A blockbuster success even before the curtain went up on opening night, the new revival of Hello, Dolly! marks legendary performer Bette Midler’s highly anticipated return to Broadway, and thanks to a top-notch cast and an award-laden production team, it more than justifies the hype.

Charles McNulty - LA Times:
Rarely has an exclamation point in a title been earned as thoroughly as the one in the new Broadway revival of “Hello, Dolly!” starring Bette Midler.

Joe Dziemanowicz - NY Daily News:
Hello, blockbuster!
They don’t make ’em like they used to — and that goes double for Broadway’s dazzling revival of “Hello, Dolly!” thanks to the show itself and its above-the-title supernova, Bette Midler.
Frankly, there ought to be another exclamation point.

Robert Kahn, NBC, New York:
Hearing Midler sing “Hello, Dolly!” is such a tingly experience that you eventually sit back down and wonder: Is this what it was like when Carol Channing debuted “Dolly!” on Broadway half a century ago? And, was Midler put on Earth to carry forth that legacy? It sure feels that way. This “Hello, Dolly!” is as blissful an escape as anyone could want.

Linda Winer - Newsday:
If there were such a thing as a happiness meter at the Shubert Theatre these days, where, oh, where would that be placed? The obvious position is in the audience, where fans of “Hello, Dolly!” and fans of Bette Midler — which may well add up to just about everyone — have come together in a palpable bonding festival of hot-ticket excitement, contentment and raucous joy.

Jesse Green - New York magazine:
Suffice it to say that in the long line of memorable Dollys I’ve seen or heard — from the alienoid Carol Channing to the louche Pearl Bailey to the enameled Barbra Streisand — Midler is by far the most natural and inviting.

Chris Jones - Chicago Tribune:
With a grinning Midler coming down the staircase — and Zaks not only gives her a descent to remember but even her own little runway out in front of the orchestra and closer to her fans — that contrived chaos, choreographed throughout with a terrific sense of humor by Warren Carlyle, all makes sense.

David Rooney - The Hollywood Reporter:
I can't recall the last time I felt a crowd so frothed up with excitement at a Broadway show, and certainly in those terms, no production currently playing in New York can touch this perfectly upholstered revival of the indestructible 1964 musical chestnut. What's more astonishing is that the enthusiasm never wanes, sending wave upon wave of love across the footlights for two and a half vigorously entertaining hours. And in a testament to the spirit of the veteran showbiz troupers who are now a vanishing breed, Midler soaks it up like a heat-seeking beacon and then beams it right back out into the house. 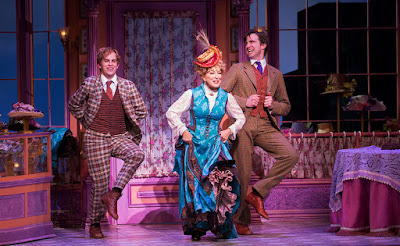 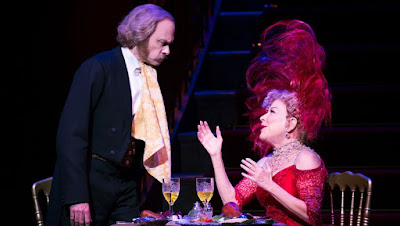 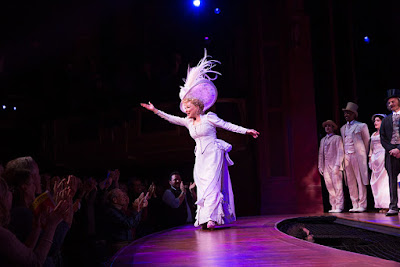