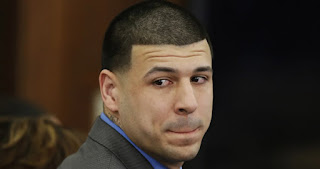 It's been reported that former pro football star and convicted murderer Aaron Hernandez had a bible verse scrawled on his forehead when he was found dead in his jail cell in what authorities believe was a suicide.
The verse from the New Testament is oft quoted by Christians and says that those who believe in Jesus “shall not perish but have everlasting life.” The words were reportedly inscribed with a red marker.
Posted by Dan Cirucci at 7:04 PM