Should They Be BANNED? What Do YOU Think?

No doubt you've seen them on the beach this summer.
No matter which beach you go to, they seem to be proliferating.
They're those YOOGE four-post canopies that envelope big 10 X 10 or more parcels of beach property. They cost 60 bucks and up but, no matter -- people are gobbling them up and erecting them on beaches at an alarming rate.
They're even putting several together to make even larger parcels.
It's called beach spreading.
These monstrosities say: "Stay out. This space is ours. Go away!" And so, beachgoers are forced to walk around them.
When they're lined up, one after another, they can become quite menacing. And some of them, via colors and logos, proclaim allegiance to various pro and/or collegiate sports teams.
So much for the good old days of colorful beach umbrellas.
The cavernous Big Beach Encampment has arrived.
But, wait: Some towns have already started banning these capacious canopies. Myrtle Beach allows beach umbrellas between Memorial Day and Labor Day but not tents or canopies. North Myrtle Beach also has an umbrellas-only policy from May 15 to Sept. 15. Rehobeth Beach in Delaware has also banned them. In New Jersey, Long beach Township has banned them and other bans are either being considered or about to be put in place.
Turns out too much of some people's idea of a "good thing" may not be such a good thing, after all. 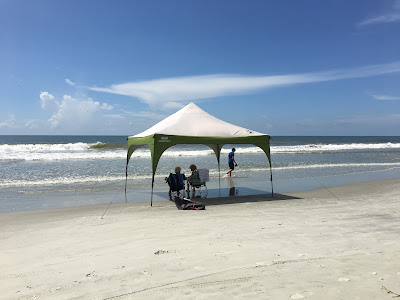 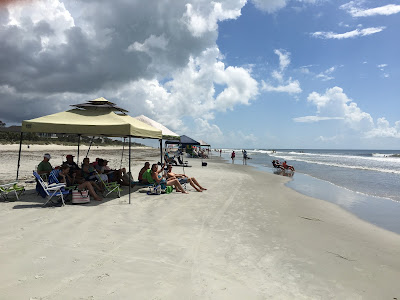