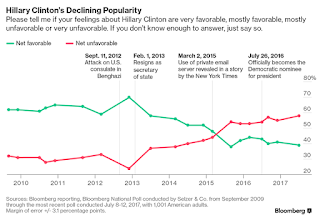 Look at Hillary Clinton's declining popularity in the Bloomberg poll.
The red line shows her unfavorable rating.
The green line shows her favorable rating.
What a tremendous slide she's suffered!
Her unfavorables are up near 60% while her favorables are below 40%. In fact, right now -- today -- Hillary Clinton is less popular than President Trump.
This is very unusual.
Usually, when someone has lost an election and is somewhat our of the spotlight, his or her popularity rises if only on account of a certain degree of empathy over the loss.
But it doesn't work that way for Hillary.
Bottom line: People just don't like her. OK?
Posted by Dan Cirucci at 2:22 PM