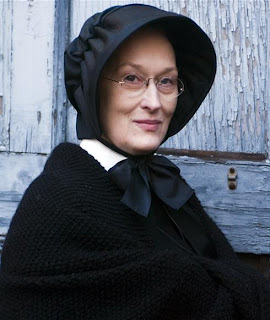 There is no finer performance on the screen this year than Meryl Streep's portrayal of Sister Aloysius in John Patrick Shanley's film of his Pultizer Prize and Tony winning play, Doubt.
If you have not seen Doubt (which also stars Philip Seymour Hoffman, Amy Adams and Viola Davis) get out to see it as soon as you can. It's a thought-provoking, intelligent, finely-acted, carefully-crafted movie that you will long remember.
Here's what Susan Wloszczyna of USA Today recently had to say about Streep and Doubt:
Heaven knows, if anyone could resurrect the movie-nun genre, which hasn't had an award-worthy Hollywood showcase since 1995's Dead Man Walking, it's Meryl Streep. Her austere role in Doubt could be her penance after wallowing in so much guilty fun (and grossing her biggest box-office hit ever at age 59) as a diva of a dungaree-donning dervish in Mamma Mia!
Stripped of makeup and shrouded in black, she's not just any movie nun, but a stern sentry of moral certitude circa 1964 known as Sister Aloysius. She's a primal force to be reckoned with in the film, based on the Pulitzer- and Tony-winning drama, opening Friday. With a Bronx squawk and righteous smirk, the record-breaking 14-time Oscar nominee who soon might reach No. 15 gives the full-blown Streep treatment to what could have been a stereotypical holy terror.
From her red-rimmed eyes that peer warily through utilitarian glasses as she patrols her school's nooks and crannies to the homemade shawl that wraps around her like armor, the no-nonsense principal is out to deflect any perceived threats to the children under her care. . . .
The most memorable cinematic nuns have some basis in reality, and John Patrick Shanley, who adapted his play and directed Doubt, drew from his own past. He sought out the technical advice of Sister Margaret McEntee, 73, who goes by Sister Peggy. She was his first-grade teacher at St. Anthony School in the Bronx and is the model for Sister James.
"She lived a life of anonymity and service, and it was my great pleasure to dedicate the film to her," says Shanley during lunch at one of his regular Soho haunts.
He believes the more mean-spirited portraits of nuns too easily discount the good such women did and the sacrifices they made. "I'm tired of people dedicating films and stuff to people who are dead. My point of view is, they can't hear you."
He certainly comes through loud and clear to Sister Peggy as she sits in the modest seating area of her living quarters at the scenic College of Mount St. Vincent in the Riverdale section of the Bronx. Much of the movie, including the church where Hoffman preaches, was shot here.
"He absolutely fascinates me," she says of her onetime pupil who used her former name, Sister James, in his 2004 play because he figured she had died. Thanks to her efforts, they reunited 48 years after they shared a classroom when she was 21 and he was 6. "I remember him from first grade. He was very quiet and reflective, a very thoughtful kid." . . .
As for filling Sister Aloysius' sensible shoes, Shanley says he didn't have to think too hard about who should bring his rigid traditionalist to life on the big screen. "If you walked out on the street here and asked 10 people who should play that part, they would have said Meryl," he says. "It's sort of a no-brainer. She is the person for the part."
BTW: Though she has been nominated for the Oscar 14 times Meryl Streep has only won twice.
And, it has been 26 years since she won the Oscar as the lead in Sophie's Choice, her second after a supporting trophy for 1979's Kramer vs. Kramer.
Posted by Dan Cirucci at 8:50 PM