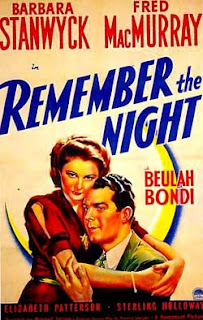 After arriving home from a glorious, traditional seven fishes Christmas Eve dinner I caught a wonderful old Christmas flick on TV last night: Barbara Stawyck and Fred MacMurray in Remember The Night (1940) from Paramount with an original screenplay by the great Preston Sturges.
Just before Christmas, Lee Leander (Stanwyck) is caught shoplifting. It is her third offense. She is prosecuted by John Sargent (MacMurray). He gets the trial postponed because it is hard to get a conviction at Christmastime. But he feels sorry for her and arranges for her bail, and ends up taking her home to his mother for Christmas. Surrounded by a loving family (in stark contrast to Lee's own family background) they fall in love. This creates a new problem: how do they handle the upcoming trial?
Nobody did Christmas like the great old Hollywood studios.
The studios knew how to use sentimentality, great stories, fine sets, and wonderful casts to create an old-home Christmas spirit tinged with pathos.
This movie also features fine character actors Bealah Bondi and Sterling Holloway.
Beulah Bondi was a favorite of directors and audiences and is one of the reasons so many films from the 1930s and 1940s remain so enjoyable, as she was an integral part of many of the ensemble casts (a hallmark of the studio system) of major and/or great films, including The Trail of the Lonesome Pine (1936), Mr. Smith Goes to Washington (1939), Our Town (1940) and Penny Serenade (1941). Highly respected as a first-tier character actress, Bondi won two Best Supporting Actress Oscar nominations, for The Gorgeous Hussy (1936) and Of Human Hearts (1938), and an Emmy Award in 1976 for her turn in the television program "The Waltons" (1972).
Sterling Holloway was known for his amusing appearance and distinctive voice. His long career led from dozens of highly enjoyable onscreen performances to world-wide familiarity as the voice of numerous Walt Disney animated films.His bushy reddish-blond hair and trademark near-falsetto voice made him a natural for sound pictures, and he acted in scores of talkies, although he had made his picture debut in silents. His physical image and voice relegated him almost exclusively to comic roles, but in 1945, director Lewis Milestone cast him more or less against type in the classic war film A Walk in the Sun (1945), where Holloway's portrayal of a reluctant soldier was quite notable. He played frequently on television, becoming familiar to baby-boomers in a recurring role as Uncle Oscar on "Adventures of Superman" (1952), and later in television series of his own. His later work as the voice of numerous characters in Disney cartoons brought him new audiences and many fans, especially for his voicing of beloved Winnie the Pooh. He died in 1992.
Thank goodness for Turner Class Movies!
Posted by Dan Cirucci at 2:15 PM