The Persistent Problem With Pennsylvania's Roads 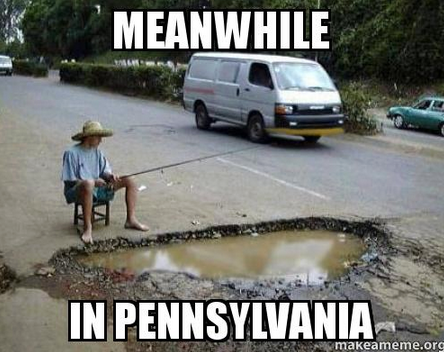 As far as we can tell, the roads in Pennsylvania are in far, far worse shape than those in Joizee.
And the traffic in the four nearby counties of Pennsylvania is much, much worse than in the three adjacent counties of Joizee.
Why has Pennsylvania allowed its roads to deteriorate so badly and why haven't they widened them and modernized them and kept pace with the traffic and the growth? Routes 76, 476, I-95, 322, 202, 611, The Boulevard, we could go on -- they're all appalling!
The infrastructure problems are huge and let's not even discuss those roving PennDot crews . . . . . It's a disgrace!
Posted by Dan Cirucci at 10:53 PM