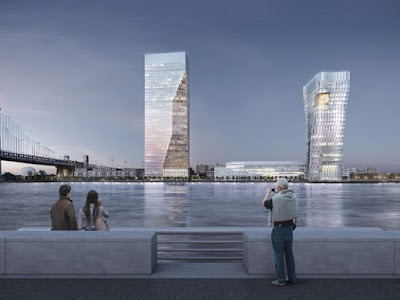 Camden Mayor Dana L. Redd, business and community leaders were yesterday joined by Governor Christie as they announced that Liberty Property Trust will lead development of “The Camden Waterfront,” a new approximately $1 billion development that will redefine the Camden Waterfront by creating as much as 1.7 million square feet of office space and include a hotel, retail and a residential component.

“’The Camden Waterfront’ represents a unique opportunity to develop a project of this scale in the center of a major metropolitan area. This visionary project will reshape the central waterfront in a way that will be truly transformative for Camden,” said Bill Hankowsky. “Through the Grow NJ program, the state of New Jersey has created an economic development program which, if approved, has the potential to be truly transformative to the city of Camden. It will create a sustainable, high performance environment that could not only ensure the future of the city but also enhance the competitiveness of the entire Philadelphia region.”

Liberty has signed an agreement with Steiner + Associates to purchase Camden Town Center LLC, with the intent to pursue the development of 16 acres of Camden waterfront. If approved by the New Jersey Economic Development Authority, the purchase of Camden Town Center LLC would confer upon Liberty the exclusive right to acquire and obtain approvals for development of the site. Subject to satisfactory completion of a due diligence process, which is expected to last approximately six months, Liberty would complete the purchase of the entity.

Liberty could break ground as early as the third quarter of 2016 with occupancy expected in late 2018 and 2019. Robert A.M. Stern, Founder and Senior Partner of Robert A.M. Stern Architects and Dean of the Yale School of Architecture, noted that "The migration of American cities away from centers of manufacturing has posed a challenge few communities have been successful in meeting," said Robert A.M. Stern. "Now here in Camden we are presented with an opportunity to make this city vibrant and viable once again. We are very excited about this chance to collaborate with long-time client Liberty Property Trust, a developer that has shown the tenacity and creativity these opportunities require, to further transform Camden's waterfront as a public place with a rich mix of new uses that will re-connect the downtown to the riverfront and also capitalize on public investments that have already been realized."

Liberty envisions a mixed-use development that will attract major corporations, employment and significant inward investment. Liberty and Robert A.M. Stern Architects have created a master plan for the development. Liberty anticipates the office component of the development will consist of build-to-suit projects for corporations seeking to grow their businesses in this environment and attract their future workforce while taking advantage of the economic benefits offered through the Grow New Jersey program.

In his remarks, Hankowsky added: “We have worked with a group of successful local business leaders over the last several months to shape this project and they will be investing in the various project components as the final plans take shape. Their belief in Camden and their support will help ensure the successful execution of this major development.” 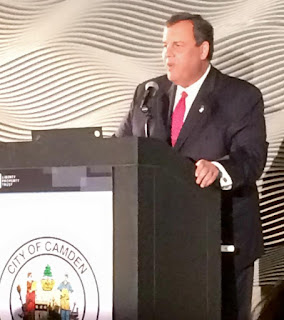 “Today’s announcement is proof that what Camden’s been doing is working,” said Governor Christie, who has made revitalizing Camden a priority of his administration. “From improving public safety to revolutionizing how children are educated to utilizing innovative policies to bring good new private sector jobs to the city, there is no question that Camden today is better off because of the bipartisan efforts of state and local leaders acting together over the last five years. By focusing on results, Camden’s best days are ahead.”

In just the past five years, Camden has seen a tremendous amount of investment and rehabilitation, including, but not limited to:
 Dramatically improved public safety: In 2012, the City of Camden police force was eliminated, replacing it with a county wide force that is today both significantly larger and more efficient. The results have been dramatic, with violent crime down across the board and a new relationship between police and the community.

 Reducing poverty: According to freshly released Census statistics, poverty dropped dramatically in 2014, falling from 42.6 percent in 2013 to 36.5 percent in 2014.
 Rethinking and rebuilding Camden schools: In 2012, Camden was given the ability to do something unprecedented: rethink from the ground up how it educates its children. The “Urban Hope Act” was a pilot program that allowed the Camden school district to close failing schools and open 15 new renaissance neighborhood schools.
The new schools are opening already, with KIPP Cooper Norcross Academy opening an all new $45 million, 1,000 student K-8 building earlier this month. Mastery School of Camden and Uncommon Schools are also in the process of opening schools, with a new Mastery School scheduled to begin construction.
 Creation of the MD Anderson Cancer Center at Cooper: In October 2013, MD Anderson brought its internationally renowned cancer care to a new, state-of- the-art, $100 million, four-story, 103,050 sq. ft. comprehensive cancer center at Cooper University Healthcare.
 Establishment of the Cooper Medical School of Rowan University (CMSRU): Opening to students in 2012, the Cooper Medical School of Rowan University is already distinguishing itself as an innovative leader in medical education and research. The school, which is the first new medical school in the area in over 30 years, will graduate its first class in 2016.
 Rutgers University expansion and Rowan University/Rutgers-Camden Joint Health Sciences Board: Rutgers University is expanding in Camden, adding a recently completed $55 million student dormitory and a soon to be constructed $62.5 million nursing school. In addition, the Rowan University/Rutgers-Camden Board of Governors Health Sciences Campus is constructing a $76 million building in downtown Camden to house collaborative programs in the health sciences from both universities.
 Demolition of unsafe and vacant structures: The City of Camden is in the midst of demolishing approximately 600 vacant and unsafe structures that scar neighborhoods and serve as havens for illegal activity. These sites will help spur new development across the city.

Earlier this month, the Census Bureau reported a sharp and striking drop in poverty in the city.

In May of this year, President Obama traveled to Camden to highlight its dramatic efforts to turn around and the success it is having reducing crime and building trust between residents and police. The President stated, "Just a few years ago, this city was written off as dangerous beyond redemption — a city trapped in a downward spiral …. Camden and its people still face some very big challenges. But this city is on to something. You've made real progress in just two years. And that's why I'm here today — because I want to focus on the fact that other cities across America can make similar progress."

Not including today’s announcement, there is more than $1.5 billion in new development that is either funded, in development or recently completed in Camden. In addition to Campbell’s continued investments, there is the upcoming location of Subaru’s American headquarters in an all-new development, the Philadelphia 76ers relocation of its headquarters and practice facility to Camden, the newly opened MD Anderson Cancer Center at Cooper, and the more than $250 million Holtec International is investing in its new headquarters.

"In the words of our President when he visited Camden in the spring, ‘change does not happen overnight,’ but I am inspired to see a city turning around before our eyes and it's all due to an unprecedented cooperation between the state, local government and committed community leaders." said Richard T. Smith, the President of the NAACP New Jersey State Conference.

"It took more than commitment though, it required rethinking what Camden could be - it can be a great city - again, a safe city where children go to good schools, live in vibrant communities and parents are able to support their families at good jobs. The NAACP looks forward to being an active partner helping make sure that Camden continues to improve and build a strong city for every resident."

Liberty is committed to working closely with community groups, the Mayor’s office, and government organizations to provide, to the fullest extent possible, employment opportunities for Camden residents during development of the project. In addition, the firms coming to Camden will work with the Department of Labor and the Mayor’s office to develop job training programs. The training program will be focused on jobs for businesses that will locate in this new development – office and technology, sales, restaurant, retail and hotel services.

“With this announcement and the critical mass of development that has been reached, what’s been going on in Camden can no longer be looked at in isolation, but rather as a plan that will fundamentally change the city’s future,” said Mayor Redd. “While it might have been hard to see the vision of Camden and Trenton leaders when these programs first began, it is inescapable that Camden has, for the first time in generations, a brighter future. Camden’s really coming together.”
Posted by Dan Cirucci at 11:59 AM