How To Know What You're Talking About, 101

To the critics of our First Lady (many of whom are uninformed and capricious). Here are a few things you ought to know:
She's the first foreign-born First Lady since John Quincy Adams's wife, Louisa Adams; the only First Lady to be born and raised in a communist country. Most likely, as the Washington Post put it, the most "linguistically gifted" first lady (she is fluent in four languages).
Focused and hard-working from the start, she became a successful model at age five and did her first commercial at 16. She has co-hosted The View with Barbara Walters and is also active in philanthropy and has been a Goodwill Ambassador for the American Red Cross and an active member of the Police Athletic League (PAL).
She's been featured in the pages of Allure, Self, Vanity Fair, ELLE, and more. 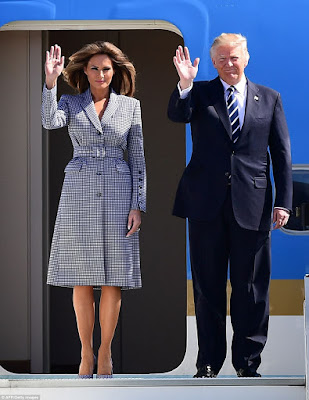 Do you know what it takes to be successful in such endeavors? It's grueling work. Very few make it to the top. VERY few.
"She's not gossipy at all, not bitchy and just really nice, though I know that's not exciting to hear," said Robert Janjigian, fashion editor for The Palm Beach Daily News. And the famous photographer Harry Benson says of Melania: "She is a very quiet and nice person"
"She's a really nice person and a fabulous mother," said Terry Allen Kramer, the Palm Beach socialite and veteran Broadway producer, echoing a point reiterated by many who know Melania.
She's known to have her own mind about things and doesn't hesitate to correct the President or steer him in the right direction. Longtime Trump associate Roger Stone said, “She’s very private and she’s very smart. Anyone who thinks she’s a mannequin doesn’t get it. She has excellent instincts into who is trying to exploit their influence with [the President]."
Kind. Focused. Self-assured. Hard-working. Gracious. Beautiful. Worldly. Smart.
A successful professional and savvy, well-informed person in her own right. A fine wife and exceptionally devoted mother.
I think she's a WONDERFUL First Lady.
Wonderful!
Posted by Dan Cirucci at 7:33 PM