Welcome Back! You've Been Gone For Far Too Long 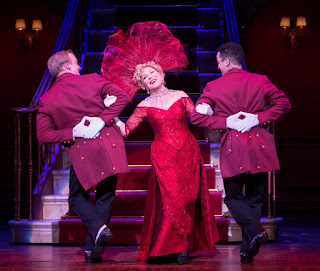 It might seem like culture shock to some but to those of us who actually remember big, brassy, boffo, bona fide Broadway musicals, the triumphant return of Hello, Dolly! has brought certain elements back to the musical stage -- elements that Broadway hasn't seen in quite awhile. Let's go over some of them:

1) The tableau.
When the curtain goes up on Dolly we are immediately struck by a huge, colorful, scenic, multi-character tableau.  Like a fixed image in grand opera or a freeze frame in a movie, the tableau does more than set the scene. It seals an image in our minds. And while Dolly's appeal is timeless, the tableau fixes the time and place for the audience. Most often used to open or close a scene or act, the tableau is a highly theatrical device that reminds us that we're watching a story come to life -- live, on stage. In Dolly, the tableaus are nothing less than thrilling.

2) Choral singing.
Once upon a time, every great musical had a significant cast of singers. Choral singing was important. Sometimes the group of singers helped to back up the lead actors and actresses. Sometimes they filled in portions of the song. And sometimes they simply sang together as a group. This was particularly important before shows were miked. Strong, robust, up-to-the-balcony group singing was a staple of all the great Rodgers & Hammerstein shows and now, with Dolly, it's back in a big way!

3) Curtain down numbers.
In the early days of musicals some numbers were typically played on the lip of the stage with the curtain down. Before mechanized (and later, computerized) scenery, this allowed for continuous entertainment and advancement of the story even while scenery was being changed. Though Dolly's scenery turns on a turntable and glides forward and backward effortlessly, a few numbers are played in front of the curtain. You've got to be really good to pull off a number like this, without a set. Fortunately, this isn't even a challenge for the great Bette Midler and the versatile David Hyde Pierce.

4) Actual choreography.
Where are today's Michael Bennetts or Tommy Tunes or Bob Fosses? Why and when did choreography seem to disappear from Broadway? Now, we seem to have "movement directors" or people who are responsible for shifting actors around like members of an athletic troupe. Dolly has vivid, joyous, heartfelt dancing -- real dancing, thanks to Gower Champion's splendid choreography and Warren Carlyle's reinterpretation of same. Not only is there a whole number called Dancing but Elegance and The Waiters' Gallop are nothing short of miraculous. 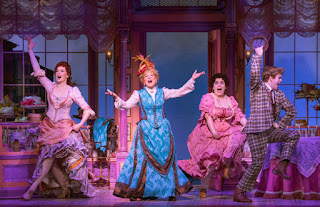 5) The overture and entr'acte.
When the 28-piece orchestra strikes up the first notes of Dolly's overture, the audience at Broadway's storied Shubert Theater literally roars its approval. And, with good reason. Not only does it showcase a classically great score but musical overtures have been missing for far too long. The audience is not only welcoming Dolly back, it's also heralding the return of the overture back to its right place at the top of the show. Again, at the beginning of Act Two, the audience greets the entr'acte with the same approval.

There are other elements of Dolly (a synopsis of scenes, parallel love stories, distinct comic bits, vivid secondary characters) that have been missing from modern musicals for far too long. Now, on Broadway, it's great to have them back where they belong. Bravo!