Please Tell Us The Conventions WILL Be Held! 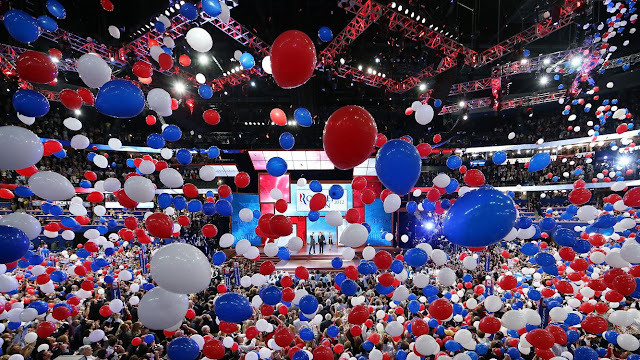 Some people are wondering whether or not the Republicans and the Democrats will be able to hold their political conventions this year  -- the GOP in Charlotte and the Dems in Milwaukee, both scheduled for August.
The Democrats have already pushed back the date of their convention and the whole idea of such a huge crowd assembled at one place is questionable in the Age of Covid-19.
But we think it would be a damned shame if there were no political conventions. We love the conventions and we've been to more than a  few, live as actual participants.
Here are our memories of some conventions we have known:

For a political junkie the quadrennial political conventions are like the Super Bowl, the World Series and the Olympics all rolled into one.
I love the bigness, the loudness, the craziness, the pageantry and the oversized oratory of these outdated spectacles.
When you see the world as one, continuing, unfolding drama as I do, the conventions are high drama on a great stage -- sorta like grand opera.

In 1964 at the Dem convention in an already fading Atlantic City. I was a Young Democrat for LBJ. We lost our Real Hero and we had to battle on with "LBJ for the USA."
When Lyndon Johnson wasn't obsessing over the possibility that Bobby Kennedy would challenge him he was teasing the party and the country with Veep possibilities. The guessing game went on for weeks -- right up to the middle of the convention, as I recall.
I also remember a huge billboard on the boardwalk with a photo of GOP nominee Barry Goldwater that said, simply: "In Your Heart You Know He's Right." And I remember standing on the convention floor with Walter Cronkite who had nothing to do and who merely watched the convention as a spectator. In 1964 Cronkite's ratings were in the tank so CBS yanked him from Dem convention coverage and replaced him with Roger Mudd and Robert Trout.
That pairing went nowhere, fast.

In 1968 Cronkite was back in the booth and I was on the ground at the infamous Democrat Convention in Chicago.
The nominee was Hubert Horatio Humphrey and I was angry. I was one of the "McCarthy Kids" -- college kids who supported and worked for anti-war candidate Senator Eugene McCarthy.
We traveled with McCarthy throughout the country and stayed in the homes of McCarthy supporters. I stayed in upscale Winnetka, Ill. but during the convention I didn't get back to Winnetka very often since we were pretty much trapped in McCarthy headquarters at the Conrad Hilton Hotel while all hell broke loose on the streets of Chicago.
I despised Chicago Mayor Dick Daley and the other party leaders who suppressed free speech and the will of the people. And we heckled Humphrey as he entered and exited the hotel chanting "Dump the hum."
But no, I did not take to the streets and no, I did not abandon the party. In the end I campaigned for and voted for Humphrey (I never trusted Nixon) and I did not take that loss very well.
Jimmy Carter altered my view of things and Ronald Reagan sealed the deal. But that's another story.

In 2000 I worked the GOP convention in Philadelphia as a volunteer and I did the same thing again in New York in 2004. I was in the house (and sometimes on the delegate floor) every night at both conventions. I'll tell you this: Democrats talk a good convention game but Republicans run the smoothest convention you'll ever see.
A Democrat convention is like college registration: everything left to the last minute, lots of hoops to jump through, fun in a weird way but totally chaotic.
A GOP convention is like being in the military: You're here and you'll do it our way and on time. For the most part Republican delegates are better dressed, more mannerly, more attentive and appear to be more appreciative.
I also found the Republican rank and file to be surprisingly broad-minded and nimble-minded, often funny and remarkably considerate, especially amidst the crowded atmosphere of a convention.
They're quite tolerant and cooperative just so long as everything moves along at a steady, efficient pace.

In 2004 I savored the GOP Convention in Manhattan at Madison Square Garden. Incredibly, the entire thing ran flawlessly, right in the middle of one of the world's busiest cities and on top of a huge transportation hub. I stayed on the concierge level of the New York Hilton (an experience I will never forget) and I spent my days enjoying the most exciting city I know. Several afternoons found me decompressing in Central Park where people watching is always a great pastime. Because New York is so big, so cosmopolitan and so adaptable, the convention barely made a dent in its normal activity. In fact, I walked to and from Madison Square Garden every day. The walk back to my hotel each evening (up Broadway and through Times Square) was nothing less than thrilling. I had a good feeling about that convention and I just knew George W. Bush was on his way to a second term.

In 2008 something told me to skip the GOP confab in Minneapolis/St. Paul. Since hurricane Gustav prompted the cancellation of the Republican opening session and almost put the rest of the convention on hold (and since everything seemed to go downhill after the convention) I guess I made the right decision.

In 2012 I had a great time at the Republican Convention in Tampa. I attended as "special media" (aka blogger) with full credentials and got to be in the house every night. I was thrilled that New Jersey's own Governor Chris Christie was one of the stars of the convention and that he delivered the keynote speech. I met many members of the media from all over the world and also enjoyed meeting so many young people who were part of that convention. I thought Mitt Romney's acceptance speech was nothing less than spectacular and enjoyed every aspect of my stay. Sometimes, the littlest things make the biggest difference. The guy at the front desk of my hotel somehow figured out that I liked to end the day with an ice cream sandwich. So, every night when I got off the bus from the convention, he had one waiting for me as I walked into the hotel. Now, that was a great memory!
Posted by Dan Cirucci at 2:04 PM