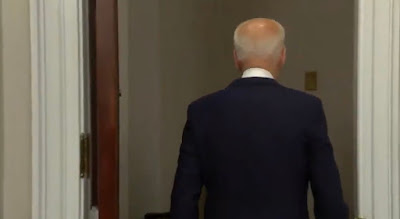 President Biden's approval rating has dropped to 41 percent in light of the Taliban's takeover of Afghanistan, a USA Today-Suffolk University poll found.
According to the survey results, 55 percent of those surveyed disapproved of Biden's job in office. That's a net approval rating of -14.
A similar result is found in the usually reliable Rasmussen Poll out today. Rasmussen shows that 44% of likely U.S. voters approve of President Biden’s job performance. Fifty-five percent (55%) disapprove.

The latest figures include 26% who strongly approve of the job Biden is doing and 47% who strongly disapprove. This gives him a net presidential approval index rating of -21.

And there's more bad news for Biden. A new Rasmussen national telephone and online survey finds that 59% of likely U.S. voters believe the Biden administration is not doing enough to evacuate Americans from Afghanistan. Twenty-eight percent (28%) say the Biden administration is doing enough to rescue Americans. Thirteen percent (13%) are not sure. That translates into a net approval rating of -31.