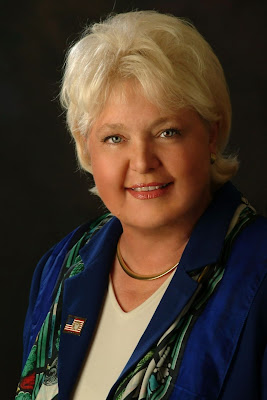 I'm absolutely thrilled with the selection of Diane Allen as Jack Ciattarelli's running mate. She is a stellar choice for Lieutenant Governor.

A hugely successful state senator who won again and again in a sprawling suburban district, Diane Allen is a proven vote getter. Like Jack himself, she knows how to win over independents and Democrats. She's demonstrated that over and over. And, in New Jersey, let's face it: you've got to do that to win and you've got to WIN to govern. Let me repeat this: Republicans can't run the state until they WIN the state. And Diane Allen knows how to win.

I've known Diane Allen for a long time. I met her years ago when I worked in public relations in Philadelphia and she was a journalist and television news anchor. She's a true trailblazer. She rose to the top -- first in journalism and then in politics -- at a time when both those professions were totally male dominated. She did it by being smart, savvy, hard-working, tenacious, sensible and goal oriented.

Diane Allen is not an ideologue. She's a doer, a bridge-builder and a common-sense problem solver. And here's one of the most important things; she knows how to relate to ordinary people. She relates to them and their everyday problems. She understands their aspirations, their frustrations, their needs and concerns. And, being a lifelong professional communicator, she knows how to talk to people in clear, concise, everyday language.

Diane Allen will be a real partner with Jack Ciattarelli. They will work as a genuine team. Be sure of this: Diane Allen wouldn't be doing this is she wasn't sure she would be a full partner. And she wouldn't be doing this unless she thought she could win. Remember: at this point in her life and her career, she doesn't need this. She's done it all. She's doing this because she wants to to it, because she obviously believes in Jack and because she loves this state. And isn't it wonderful that Jack is the kind of guy who welcomes a strong, smart, sensible woman as his working partner? Isn't that the kind of governor and the kind of leader we want?

This is also great news for South Jersey because Diane Allen will be a big draw here in the suburban Philadelphia market where she is not only instantly recognized but actually beloved. She will give the ticket a big boost in Burlington County (which is key) and her drawing power will extend all the way to the Jersey Cape and even into border counties like Monmouth and Ocean.

Senator Allen also brings a bit of media goodwill with her. The media respect and admire her and that certainly won't hurt the ticket.

Plus, this woman has a reputation for integrity that is unmatched. There's never been even a hint of impropriety attached to her. Never! That's rare indeed in New Jersey politics.

The choice of Diane Allen speaks well of Jack Ciattarelli and gives us the best of New Jersey Republicanism. It signals a capacious, welcoming party that hears the people of New Jersey; that understands their hopes; that cares about their concerns and embraces their dreams. This gives us an action-motivated, can do team that's not only ready to fix our state but that's fully equipped to get to work on on day one.

This is a magnificent choice!