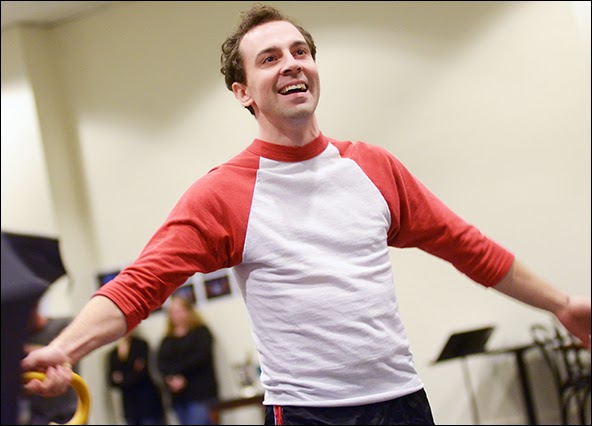 Rob McClure is the perfect musical comedy star.
One minute he's all limber, like Ray Bolger or Martin Short. The next, he's wisecracking like Nathan Lane. And then, before you know it he's as nasal and as nebbishly lovable as Matthew Borderick.
You'd never mistake him for a matinee idol.
But with his tousled hair, expressive eyebrows, broad grin and endearing mannerisms he defies his diminutive frame and triumphs from the first row of the orchestra all the way up to the last seat in the balcony. He's a lightening bolt of energy powerful enough to warm the whole Nederlander Theatre this winter.
And when he steps forward at the beginning of Broadway's new madcap musical Honeymoon In Vegas and sings "I Love Betsy," he takes the most clever lyrics that Broadway has heard in years and weaves them into a combination of charm and chutzpah that generates instant appeal.
For McClure's performance alone, Honeymoon is worth the price of admission.
But this musical sendup of the 1992 movie of the same name has lots more going for it: The lovely Brynn O'Malley as McClure's love interest, unforgettable comic turns by Nancy Opel, Matthew Saldivar and David Josefsberg; a big, brassy, first-rate orchestra up on stage; and the well-earned, toe-tapping star power of Tony Danza as McLure's nemisis. On top of all that the show boasts a truly funny book by Andrew Bergman, tuneful music and inventive lyrics by Jason Robert Brown, great sets by Anna Louizos and the spot-on direction of Gary Griffin.
But, playing off one another McClure and Danza actually propel the show with O'Malley as the perfect, pulchritudinous part of an unlikely love triangle.

It all begins when on her deathbed, a mother (Opel) makes her son (McClure/Jack) promise never to get married. This promise haunts him and triggers psychological blocks to a commitment with his girlfriend (O'Malley/Betsy). Still, on the spur of the moment the couple finally decide to tie the knot in Vegas. But once there, a seemingly wealthy gambler and con artist (Danza/Tommy) arranges for the about-to-be-groom to lose a fortune in a poker game. Tommy then offers to clear Jack's debt in return for a weekend with Betsy. Suddenly Jack agrees (sort of) but then becomes wildly jealous, and pursues his fiancée and her much older companion all the way to Hawaii where Jack finds pitfalls in his path as the gambler tries to delay his interference. That's where the Flying Elvises come in, but we don't want to give away the ending.
This is the kind of zany tale that gave birth to musical comedy in the first place. This is why Broadway was born and this is how Cole Porter wrote funny, unforgettable songs for shows such as Anything Goes. And you will think of tunesmiths like Porter and Loesser and Comden and Green when you hear Danza sing "Out of the Sun" or you hear other numbers like "Everyday Is Happy In Hawaii," and "Friki Friki" and "Airport Song." They're truly comedy in song.
But you'll also hear new ballads such as "Forever Starts Tonight" and "You Made the Wait Worthwhile."
Yes, this April-December hookup over a gambling "debt" may be a bit of a stretch. And yes, the second act does lag somewhat. And yes, the 1992 Vegas of the movie and the 2015 Vegas of the musical get tossed together in a sometimes confusing clash of eras.
But with McClure's ready-to-please boundlessness and Danza's sure-footed take on a soft-hearted wiseguy, this is a show that combines music and comedy with just the right touch.
And, you may actually exit this original musical humming a new tune. When was the last time that happened?
Posted by Dan Cirucci at 3:12 PM