From our friends at The Save Jersey Blog:
By Matt Rooney | The Save Jersey Blog
If Dr. Martin Luther King, Jr. was alive and well today, Save Jerseyans?
I think he’d be impressed by how color blind my generation is; he’d also be disgusted by the Al Sharptons and Jesse Jacksons of the world and how they’ve profited while many of America’s black neighborhoods continued to suffer. 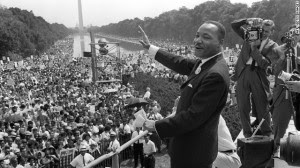 So we can honor Dr. King’s legacy through volunteer work, yes, but more importantly by rejecting race profiteers and voting for REAL change. Not the fluffy, fake Obama variety that comes prepackaged in a can.
“The time is always right to do what is right.” Amen!

Where to start?
Republicans can stop wasting MLK Day with platitudinal calls for “service” in our communities and utilize a unique opportunity to advocate for, again, REAL change. Like the implementation of school choice reforms. The inequality in our education system isn’t tied to funding, and it remains the last great civil rights hurdle facing America’s youth.
Why don’t more GOP’ers speak out? They don’t do it more often, I suspect, due to a lack of confidence. They’re gun shy after effectively getting hit with the race card for decades, but I believe it’s a needless fear because the country is changing.
We’re more color blind than ever. Barack Obama and his party’s economic job performance where black America is concerned is nevertheless nothing short of abysmal.

What’s more, the Obama Administration’s shameful handling of the Ferguson situation – juxtaposed with his symbolic abdication of international leadership by skipping the Paris anti-terror rally – has shaken America’s confidence in this president’s character.
So much so that a new Monmouth University poll out today found only 15% of Americans believing race relations in our country are getting better during the Obama years; 43% say they’re getting worse. 68% of black Americans say they’re either worse or not improving.
This is a historic opportunity to overcome many years of lies, distorted history, and a bad policy to achieve a breakthrough in our country’s political race relations. Young, charismatic and skilled leaders like Mia Love and Tim Scott can open doors if we’re brave enough to back them up.
Dr. King said it best:

My earnest prayer for today, Save Jerseyans? For my fellow Republicans to be courageous in 2015, 2016 and beyond. It’s not just a partisan thing; MLK’s country and his people need it.
Posted by Dan Cirucci at 9:17 PM