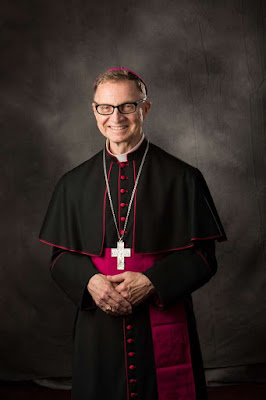 Today, Philadelphia Archbishop Charles J. Chaput, O.F.M. Cap. ordained Most Reverend Edward M. Deliman to the episcopacy at the Cathedral Basilica of Saints Peter and Paul, the mother church of the Archdiocese of Philadelphia, in front of a capacity congregation. Most Reverend Ronald W. Gainer, Bishop of Harrisburg, and Most Reverend Nelson J. Perez, Auxiliary Bishop of Rockville Centre, were the Co-Consecrators.

Bishop Deliman has a long standing relationship with Hispanic Catholics throughout the Archdiocese of Philadelphia as most of his assignments have included extensive ministry to Hispanic or Latino Catholics. His specific duties as an auxiliary bishop will be defined in the coming weeks and months.

The role of an auxiliary bishop is to assist the diocesan bishop by sharing in his pastoral and administrative work and to act in his name. Like all bishops, auxiliaries are successors to the Apostles.

Biographical Information on Most Reverend Edward M. Deliman
Bishop Edward M. Deliman was born in Lorain, Ohio, on March 4, 1947 to Edward Deliman (deceased) and Margaret Rackish Deliman. He has two brothers, Michael and Francis. Both are married and have four children between them.

Bishop Deliman’s family moved to Morrisville (Bucks County) in the early 1950s and became members of Holy Trinity Parish. He attended Holy Trinity Parish Elementary School, which was staffed by the Sisters, Servants of the Immaculate Heart of Mary. He then attended Bishop Egan High School in Levittown for two years before entering Saint Charles Borromeo Seminary. At the Seminary he earned Bachelor of Arts and Master of Divinity Degrees. Upon completion of his studies and the program of formation, he was ordained to the Priesthood by John Cardinal Krol in 1973. After ordination, he studied Spanish in Douglastown, New York, and later served as an assistant priest at a parish in the Archdiocese of San Juan to further hone his foreign language skills. In 1991, he was named an Honorary Prelate of his Holiness with the title of Monsignor by Saint Pope John Paul II.

In addition to his parish-based ministry, he previously assisted the Office of the Metropolitan Tribunal as an adjunct auditor. He also served as a Priest Vocation Coordinator and Spiritual Director for seminarians.

In designing the shield—the central element in what is formally called the heraldic achievement—a Bishop has an opportunity to depict symbolically various aspects of his own life and heritage, and particular aspects of Catholic faith and devotion. The formal description of a coat of arms, known as the blazon, uses a technical language, derived from medieval French and English terms, which allows the appearance and position of each element in the achievement to be recorded precisely.

The primary object or charge depicted on Bishop Deliman’s shield is a Cross. The particular design of the Cross with two crossbeams — known as thepatriarchal Cross — the arms of which are slightly concave, is also known as the Cross of Saints Cyril and Methodius. It is the central charge in the coat of arms of Slovakia, and has been used as a symbol of the Slovak nation since before the year 1000. All of Bishop Deliman’s grandparents immigrated to the United States from Slovakia. 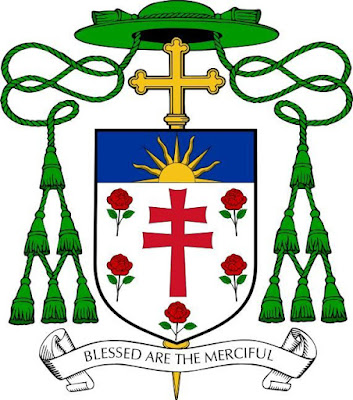 Bishop Deliman’s baptismal patron, Saint Edward the Confessor, ruled as King of England from 1003 to 1066. His royal coat of arms is traditionally depicted as a Cross flory (that is, with its arms terminating in fleurs-de-lis) surrounded by five small birds called martlets. To recall Saint Edward, Bishop Deliman places the Slovak Cross on his shield amid five small charges as well. Here the charges are five roses, traditional symbols of Saint Rita of Cascia (1371-1447), an Italian Augustinian nun whose powerful heavenly intercession is widely sought in difficult and desperate need. Bishop Deliman has promoted devotion to Saint Rita for many years, after having received extraordinary help for a family member through her intercession.

Bishop Deliman has served the Archdiocese of Philadelphia as a priest since his ordination on May 19, 1973, and for 38 of those 43 years he has ministered primarily to Spanish-speaking Catholics in various parishes. The Hispanic population of the archdiocese is diverse, coming from virtually every part of Latin America, and although there is no one symbol to represent all of these cultures, many Latin American nations include the sun in their flags and coats of arms. Bishop Deliman displays a rising sun on a horizontal bar at the top of the shield (the chief) to recall his ministry to Hispanics in the archdiocese.

The rising sun also alludes to the fact the Bishop Deliman’s ordination a bishop falls during the Extraordinary Jubilee of Mercy convoked by Pope Francis. In the canticle known as the Benedictus (Luke 1:68–79), Saint Zechariah prophesies that his newborn son, Saint John the Baptist, will announce the salvation and forgiveness that Christ will bring “through the tender mercy of our God, when the day shall dawn upon us from on high” (v. 78). The same theme is echoed in the motto on the scroll below the shield, the first words of the Fifth Beatitude: “Blessed are the merciful, for they shall obtain mercy” (Matthew 5:7).

The shield itself is ensigned with external elements that identify the bearer as a bishop. A gold processional cross appears behind the shield. The galero or “pilgrim’s hat” is used heraldically in various colors and with specific numbers of tassels to indicate the rank of a bearer of a coat of arms. A bishop uses a green galero with three rows of green tassels.
Posted by Dan Cirucci at 8:56 PM