Why Don't They Tell You About THIS? 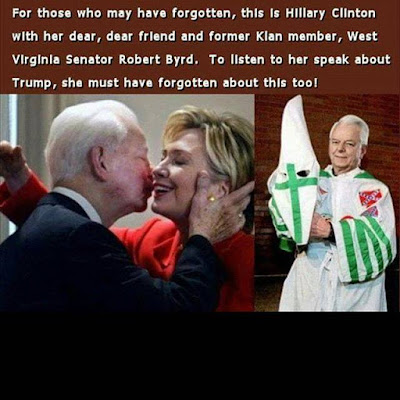 Democrat Senator Robert Byrd served as Exalted Cyclops (the highest office attainable) of his chapter of the white supremacist Ku Klux Klan. For at least six years he was either involved with or espoused admiration for the Klan, defending its hateful policies and actions. THIS is the man that Hillary Clinton praised and pointed to as her mentor.
This should surprise no one as history teaches us that Democrats were long the strongest defenders of segregation and were among the founders and leaders of the Klan.
The Republican Party was founded precisely to oppose this legacy of hate. Without Republican votes in the House and the senate the landmark civil rights legislation of the 1960s and 1970s would have never become law. Republicans made equal rights happen.
Posted by Dan Cirucci at 6:48 PM