The Simple Truth About What Happened . . .

Certainly, Donald Trump's stunning November victory has to be the biggest story of the year. 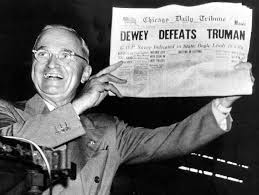 His election is the most earth-shattering political upset since Truman defeated Dewey in 1948. And Trump campaigned in a Trumanesque manner. Like Truman, he spoke the language of real people. Like Truman, he reached out to everyday Americans. Like Truman, he was not afraid to cajole, provoke and challenge conventional wisdom peddled by the mainstream media. And like Truman, Trump was given to using salty language.
Both men showed a mischievous side and enjoyed a good laugh as well.
Yes, Harry Truman was dismissed by elites as crude, brusque, ill-informed and culturally illiterate.
The Man from Missouri was seen as a small town wannabe not worthy of any high office much less
the presidency. The powers-that-be viewed him as an impulsive pretender, an inconsequential obstruction that they simply needed to get beyond.

Donald Trump, a master builder, promised to Make America Great Again. Truman, a shrewd poker player, promised A Fair Deal for everybody.
They were both grossly underestimated (something which did not seem to bother either man) and they both defied the odds and triumphed.
Plus, Truman wasn't idealogical and neither is Trump. Pragmatism is yet another thing they share.
Why didn't Hillary Clinton succeed?
Well, of course, she not likable as a public person. She may be quite a likable person in her everyday dealings but on the Big Stage, she comes off as rehearsed and artificial. She seems out of her league. There's just something unnatural, often downright awkward and ill-at-ease, about the way she approaches public life.
She's not very funny. She's not very engaging. She's not very open or spontaneous.
No, she wasn't as aloof as the imperious Thomas E. Dewey (Truman's hapless opponent) but, alongside Trump she seemed to stiffen and/or cringe. She simply wasn't a match for him.
Watching Hillary Clinton during the debates, we often thought she would have made a great policy wonk, backstage advisor or leader of one of those Washington think tanks. After all, she was quite happy when she worked for the Children's Defense Fund inside the beltway. That seemed to be her natural domain. She's comfortable around bureaucrats and functionaries.
But she had an overarching need to feel she was making a positive difference in some dimension, within some niche. She could have stayed with that, left it at that. She would have had quite a nice career for herself, receiving well-earned praise and deserved honors while enjoying the fruits of her labor.
But she got mixed up with Bubba and was hopelessly drawn into his raucous, reckless, trashy and ultimately destructive vortex. 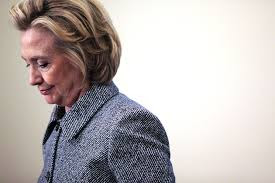 A real argument could be made that Hillary was too thoughtful, too detail-oriented and probably too sensitive for Bubbaland. What a wild and precarious ride it turned out to be for this intense, WASPy woman from the midwest who was raised as a conservative Republican.
Why did she stay with him?
Why did she hang on?
The crowds screamed "Put her in jail!" But the truth is that Hillary already seemed trapped in a prison of her own making.
Why didn't she leave when she had the chance, or chances for that matter? There were many moments when she could have simply walked away and defined herself, unencumbered by such an immature, egotistical and ruinous mate.
Why?
Well, that's a question that will be studied endlessly.
Was it the aphrodisiac of power that urged her on?
Was it some deep seated insecurity on her part that made her feel she could not do it without him?
Was it the notion that in succeeding in this one last, ultimate quest she would not only prove herself to him but maybe even supersede him in some way?
Or was it (dare we say) simply love, as distorted as that may seem?
It's a conundrum that we'll leave for history to ponder.
Posted by Dan Cirucci at 1:57 PM