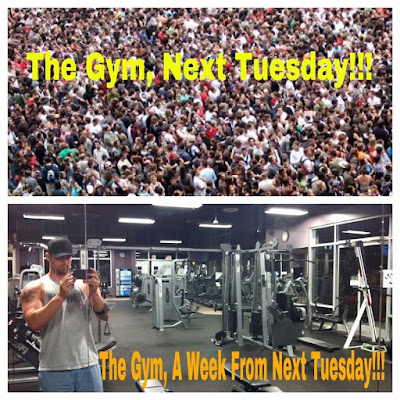 No, you won't guess them because we don't have any. None!
We've never made New Year's resolutions.
And we won't be making one this year either.
Why?
Because they're stupid.
Think about it: A resolution (promise) is a Big Deal. And when you make it with the entire year ahead of you, well -- that's a long haul.
Plus, January and February are just dreadful months and an awful time to have to keep your resolution.
For example, suppose you resolved to watch your diet. What the hell is there to do during the dreary months of January and February except eat? And now you've gone and prevented yourself from eating. How are you gonna enjoy those Super Bowl parties or that Valentine's dinner with your sweetheart? And what about those l-o-n-g winter days when you want a cheesesteak or a pizza? Don't tell me you're gonna deprive yourself.
Suppose you resolve to work out more and get more exercise.
You'll have to run on a treadmill or somesuch. What's more stupid than that? You're indoors, you're runnin, you're sweatin and you ain't goin nowhere. Then you're all perspired and running toward your car in the frigid weather. That's a quick way to get pneumonia. Why would you want to do that?
But people go ahead and make these dumb resolutions anyway.
And 99% of the time these resolutions are not kept.
Remember this: When you make a promise, that promise is gonna weigh on you. It's only gonna make you do the opposite because you're gonna be thinkin about the promise all the time.
"Don't eat."
Whoa -- Did someone say "Eat?" Eat. Eat. Eat. Eat!
Ya see what I mean?
When you make a resolution, you're your own worst enemy. You're fighting yourself.
Here's the one way to approach this year and every year: Don't get too carried away on any front. Try to live fully but moderately. Avoid excess whenever you can.
Yeah, you can go overboard once in awhile but don't make it a habit, OK?
Be sensible. Use your noggin.
Then, you won't have to worry and you won't have to make resolutions.
You'll be fine.
Happy New Year!
Posted by Dan Cirucci at 7:59 AM