Remembering, With Reverence, Renewal And Hope!

"Martin Luther King believed, as I and so many Americans do, that our country will never be completely free until all Americans enjoy the full benefits of freedom."~Ronald Reagan, January 18, 1986

Republican National Committee (RNC) Chairman Reince Priebus and Co-Chair Sharon Day released the following message celebrating the legacy of Dr. Martin Luther King, Jr.:
“Dr. King’s tireless commitment to justice and reconciliation ushered in a new era of freedom and inspired individuals the world over,” said RNC Chairman Reince Priebus. “Whether through his persuasive writings, his principled civil disobedience, or his impassioned speeches, Dr. King was a vanguard voice in the fight for equality and liberty. As we honor Dr. King today as a paragon of freedom, we reflect on his powerful words and strive anew to embrace his vision of a unified America.”
“Dr. Martin Luther King was an American hero whose message was so enduring that not even death could silence it,” said RNC Co-Chair Sharon Day. “His legacy of striving to ensure that all Americans could achieve equal opportunity forever marks him as an indispensable advocate for the American Dream. Let’s take time today to remember what he stood for, and honor his call to treat our fellow man with dignity and respect.”
Republican Party of Pennsylvania Chairman Rob Gleason released the following statement regarding Dr. Martin Luther King Day.
“Dr. Martin Luther King proved that leading with courage, dignity and a commitment to peace can change the world for the better. Dr. Martin Luther King’s legacy lives on in the countless Americans who’ve been motivated by his bravery and passion. As Chairman of the Republican Party of Pennsylvania, I want to wish everyone a very happy and inspiring Martin Luther King Day.” 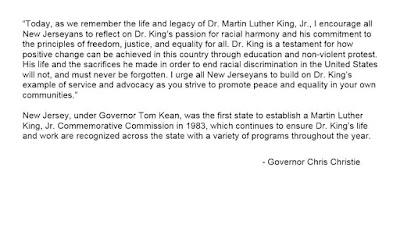