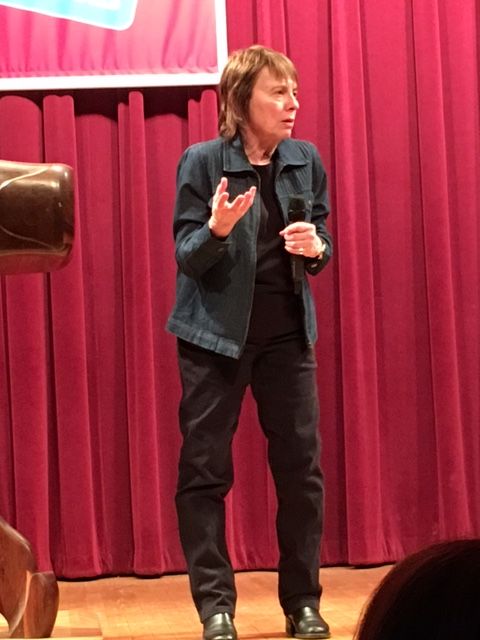 A couple of evenings ago we saw the daring, provocative, brilliant scholar Camille Paglia speak at The Free Library of Philadelphia as she launched her book tour for her new collection, Free Women, Free Men.
The photos you see here were taken during that event.
Paglia is one of the most dynamic, passionate, intense, articulate and thought-provoking speakers we've ever seen or heard anywhere. And, we've seen and heard a lot of them over the years.
It's almost impossible to take notes during a Paglia lecture/performance because the good professor talks so fast that it's all you can do to follow her in your mind, let alone via pen and paper or keypad. She's nothing less than breathtaking. 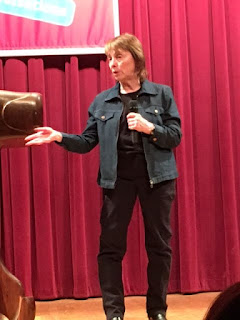 When the Free Library posts the podcast from the event we'll link to it.
But, in the meantime, here are excerpts from a splendid interview with Paglia just published at Broadly, which is part of Vice (www.broadly.vice.com):


"What I'm saying in Free Women, Free Men is that women can never be truly free until they let men too be free—which means that men have every right to determine their own identities, interests, and passions without intrusive surveillance and censorship by women with their own political agenda. . . .

"It is an absolute outrage how so many pampered, affluent, upper-middle-class professional women chronically spout snide anti-male feminist rhetoric, while they remain completely blind to the constant labor and sacrifices going on all around them as working-class men create and maintain the fabulous infrastructure that makes modern life possible in the Western world. . . . I've seen figures indicating that 92 per cent of people killed on the job are men—and it's precisely because men are heroically doing most of the dangerous jobs in modern society. The bourgeois blindness of feminist leaders to low-status working-class labor by men is morally corrupt! . . . 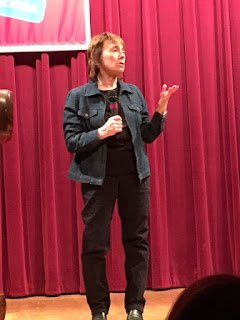 "One of the themes running through my book is the excessively bourgeois or white middle-class assumptions of so much feminist thought today. For example, I find Facebook's Sheryl Sandberg insufferably smug and entitled. I thought her bestselling book, Lean In, was utterly dishonest in failing to acknowledge how the affluent lifestyle of women executives like herself requires a rotating squad of servants and nannies, whom she has carefully kept invisible. I argue that country women of the agrarian era were physically and mentally stronger than today's high-profile, feminism-spouting women careerists, doing their Pilates and spinning routines at the pricey gym. . . .

"The great irony is that too many of today's privileged white middle-class girls at elite schools can't seem to express themselves forcefully enough even to manage their own dating lives. They have to run to parental proxies on campus grievance committees to intervene for them. This isn't feminism—it's neurosis and hysteria. . . .

"Young people have been far too passive about the degree to which their lives are being controlled by commissars of social engineering who pay lip service to liberalism but who are at root Stalinist autocrats who despise and suppress individualism."

We URGE you to read the entire interview!
Posted by Dan Cirucci at 5:00 PM