Should We Really Feel Sorry For Him, Or What?

When the Donald Trump "p___y-grabbing" video surfaced Billy Bush was so embarrassed, so horrified, so humiliated that he was forced to decamp to his parents' Upper East Side digs.

Billy, the 45-year-old nephew of President George H. W. Bush and the father of three, couldn't even bear to watch the tape saying it left him "totally and completely gutted." And he had an oh-so-hard time explaining it all to his teenage daughter who was away at boarding school.

Billy hasn't spoken about the seven-month-old tape revelations till now because "things were happening way to fast," the former Access Hollywood and Today show co-host tells The Hollywood Reporter in an exclusive interview. 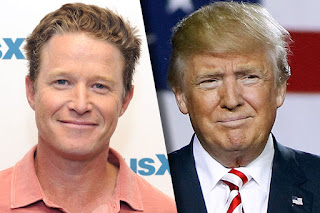 Yes, Billy left Today with a "multimillion-dollar severance package" but even now his voice grows "shaky" and his eyes "watery" when he has to talk about the incident. It was all so painful that Billy sought solace from pop spiritual guru Tony Robbins who had him walking over fiery hot coals. When he wasn't doing that, "he took up yoga and meditation, he developed a boxing routine" and he read a book called 10% Happier "written by ABC News anchor and buddy Dan Harris."

Everybody seems to feel poor Billy got the raw end of the deal. After all, the Hollywood Reporter notes, "the other guy on the tape is now in the White House." But Billy can't comment on all that because he signed a nondisclusure agreement which prevents him from going into detail about his exit from NBC.

Billy says "plenty of people" at NBC knew about the 11-year-old tape, so isn't it funny that it didn't appear in The Washington Post until the October before the presidential election? Funny the way that happens, huh?

Billy doesn't know who gave the tape to WaPo, or when. The way he explains it, he was "kind of bopping along" and then: "Ka-boom!  . . . It all comes apart."
In fairness, Billy admits: "I'm not a victim. There are people who are going through things far worse than me." We'll second that. Absolutely. It's sorta hard to feel sorry for the guy, given the world we live in.

And, finally we'll also advise Billy, who says he's never had a publicist or a lawyer before (Really!?) to keep his publicist and keep his lawyer.