When, Oh When, Oh WHEN Will We Ever Learn? 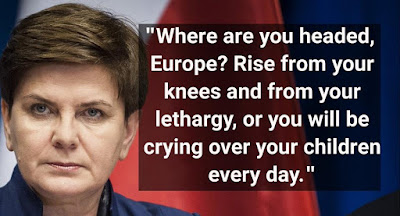 The advice you see above comes from Beata Szydło, Prime Minister of Poland.
Poland is a country that knows a thing or two about armed suppression, invasion and the loss of freedom. And the Prime Minister's message is as clear and justified and wise as it can be.
But we fear that once again this sort of sound advice will fall on deaf ears.
Why?
Because, like much of America, Europe has totally lost its way when it comes to how to respond to terrorists and terrorism.
Sadly, the limp, liberal response still rules the day. The response goes like this: Express outrage, then organize a candlelight vigil and march under the banner of "unity" born of "compassion." Sing Kumbaya or similar sweet nonsense, pay homage at a roadside vigil, post a quickly-devised empathetic symbol or emoji on social media and then, then -- go back to your normal routine and wait to be attacked again!
That's the formula.
And it's being carried out over and over and over again.
And you and I know (or should know by now) that it just doesn't work.
But too many "leaders" and too much of the media and academia and entrenched interests and the popular culture keep pressing this response. And, the seemingly clueless, apparently docile masses who follow them keep falling into line.
This is more than disheartening.
It's more than depressing.
It's more than degenerative.
It's downright self-defeating.
It's unquestionably the clear and ominous route to subjugation.
So, let us end by borrowing the final line from one of those mindless, rainbow-colored liberal anthems that have led us down this dismal road before: When will they ever learn, when will they ever learn?
Posted by Dan Cirucci at 7:08 AM