We were sorry to hear of the recent death of Peter Hearn who served as Chancellor of the Philadelphia Bar Association in 1989. It's hard for us to imagine that was almost 20 years ago as our days with Peter Hearn are vivid in our memory and our thought of him have always been nothing but fond. Peter was 84.
Former Philadelphia Bar Association staffer Nancy Hebble probably said it best when she observed that Peter Hearn possessed "a natural grace." Peter was fair and even-handed in his dealings with
everyone. He never raised his voice and one seldom heard him say an unkind word about anyone. He was open to new ideas, curious about people and always ready with a quick quip or humorous observation, usually delivered dryly. Peter Hearn was a good listener. He looked you straight in the eye and you knew you were reaching him in some way when he would respond with his trademark "Is that right?" 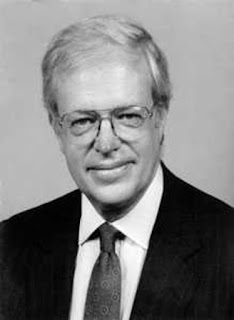 Of course, he really fit the part of Chancellor of the Philadelphia Bar Association, the nation's oldest chartered group of its type. Tall and thin with silver hair and rimless glasses, he was a publicist's dream come true because he looked, sounded and acted exactly the way you hoped he would. He could make everything from a soundbite to a major speech sound true and authoritative.
You could have called Peter Hearn the last of the brahmin chancellors but we never saw it that way because this gentlemanly counselor was well-versed on the issues of the day, up to date with the popular culture and always approachable. He had wide-ranging interests and, though he loved the law, he was not the kind of lawyer to be consumed by it.
We could tell you many stories about this fine Philadelphian and his admirable sense of equanimity but two in particular stand out:

This was the Peter Hearn that we remember.


He was gracious. He was steady. He cared about people. He listened. He spoke his mind clearly and fought the good fight.
And all of this reminds us that life isn't compartmentalized but rather is the sum of all your actions and that even the smallest daily actions can make a big difference.
In both big ways and small, Peter Hearn made a difference -- a very positive difference -- and we're proud to have known him and worked for and with him.
Click here to read more about Peter Hearn.
Posted by Dan Cirucci at 4:57 PM