STILL A Sensation After All These Years . . . 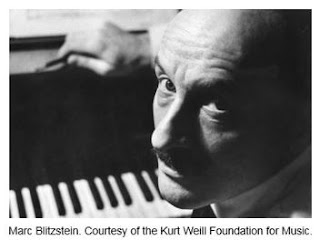 The National Museum of American Jewish History (NMAJH) celebrates the legacy of Philadelphia-born composer Marc Blitzstein with a reading of Jason Sherman’s play, It’s All True, about the true story behind Blitzstein’'s famous musical, The Cradle Will Rock, on its 80th birthday. Held in partnership with InterAct Theatre Company, the reading will take place at NMAJH on Monday, June 12 at 7pm.

Blitzstein’'s controversial 1937 musical The Cradle Will Rock created a sensation when, hours before curtain on premiere night, the show was shut down by the government due to its pro-union themes. The historic event is brought to life in the fast-paced comedy It’s All True, chronicling Orson Welles’ defiance of government censorship to stage Cradle. InterAct—founded in 1988 and dedicated to producing new and contemporary plays that explore the social, political, and cultural issues of our time— produced the Philadelphia premiere of It’s All True in 2001. Directed by Barrymore Award-winner Seth Rozin, the production garnered six Barrymore Award nominations. The reading at NMAJH reunites actors Scott Greer and David Bardeen (2001 Barrymore Award winners for their performances as Orson Welles and John Houseman), David Ingram, and Anthony Lawton, and welcomes Catharine Slusar and Rachel Camp.

Earlier in the day, at 11 am on June 12, the Pennsylvania Historical & Museum Commission in partnership with NMAJH and Curtis Institute of Music will host a dedication ceremony for a state historical marker commemorating Blitzstein at his birthplace: 419 Pine Street. This free, public event emceed by NMAJH’s CEO and Gwen Goodman Director Ivy Barsky will feature performances from The Cradle Will Rock, and guest speakers will address his musical legacy, his roots in Philadelphia, and his work as a socially progressive artist. A reception will follow at Society Hill Synagogue (418 Spruce Street).

Hailed as one of the 20th century's most influential American composers and lyricists, Marc Blitzstein was a contemporary of Aaron Copland and Virgil Thompson and a mentor to Leonard Bernstein. Born in Philadelphia in 1905, Blitzstein showed musical promise as a pianist at a young age, going on to study composition at the Curtis Institute. While he composed in all genres, the theater gave him his greatest successes, including The Cradle Will Rock (1937), Regina (1949),and an English adaptation of Kurt Weill and Bertolt Brecht’s The Threepenny Opera. Through published writings and lectures, he contributed extensively to the ongoing discourse over developments in American music and theater. At the time of his unexpected and tragic death in 1964, much of his work was left unfinished and unpublished, leaving behind a legacy that has been largely overlooked.

For more information or to purchase tickets to the play reading, visit bit.ly/NMAJHblitzstein.


About the National Museum of American Jewish History

The National Museum of American Jewish History, located on historic Independence Mall in Philadelphia, brings to life the more than 360-year history of Jews in America. Tracing the stories of how Jewish immigrants became Jewish Americans, the Museum invites visitors of all backgrounds to share their own stories and reflect on how their histories and identities shape and are shaped by the American experience. An open door for all, NMAJH honors the past and contributes to a better future by sharing the power of imagination and ideas, culture and community, leadership and service, in ways that turn inspiration into action.

The National Museum of American Jewish History is located at 101 South Independence Mall East at the corner of Fifth and Market Streets in Philadelphia. Museum hours are Tuesday to Friday, 10:00 am - 5:00 pm, and Saturday and Sunday 10:00 am - 5:30 pm. NMAJH is closed most Mondays, including federal holidays and some Jewish holidays. Museum admission is $12.00 for adults, $11.00 for senior citizens and youth, free for children 12 and under, Museum Members, and active military with ID. Connect with the Museum on Facebook, Instagram, Twitter, and Pinterest. For more information, visit NMAJH.org or call 215.923.3811.
Posted by Dan Cirucci at 7:59 PM